Friday dawned clear and bright; it appears that the constant mist we've had has finally left. This is the best kind of October weather here -- warm in the sun, cool in the shade.

When I was here for previous Writers Festivals, I attended every session. It was wonderful, but also very intense. This year I volunteered to help out as needed, so I couldn't go to as many sessions. Maybe I am even enjoying them more this way! There were 11 different presentations yesterday, plus three book releases and two Q&A sessions with artists/photographers. I spent two hours at the front gate registration table and one hour in the booth selling T-shirts, hats, etc., with the festival logo.

The morning began in Parker Hall with the usual welcome and introductions. The Upper Years students are required to attend a certain number of sessions (classes were cancelled for the day). The Lower Years through Grade 5 had their own special events, but they started out all sitting on the stage. After the introductions, Paro Anand, a children's author and storyteller, told part of a story about an angel born without wings. She was wonderful, very engaging, and the kids (and the adult audience) enjoyed it. 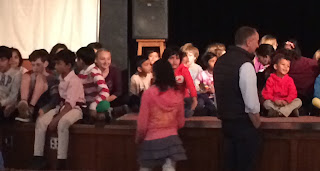 Here's a photo of Steve Alter, alumnus, author, friend, and founder/director of the festival. 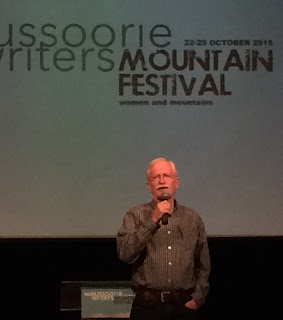 The first presenter was Manjari Mehta, a classmate of Steve's and an anthropologist. She talked about the village near Kedarnath where she did her research 30 years ago. She had photos from then as well as some now. The lives of the village women have changed drastically; the young ones are being more educated and many improvements have been made.

Gerlinde Kaltenbrunner grew up in a small village in Austria, where the priest loved the outdoors. She and others would go to church on Sunday morning in their hiking boots and gear, and the priest took them up into the mountains for the rest of the day. She became one of the world's great woman climbers -- she has scaled all the world's 8000-meter-plus peaks without supplemental oxygen. Her talk focused on her successful attempt to climb K2 after several failures. 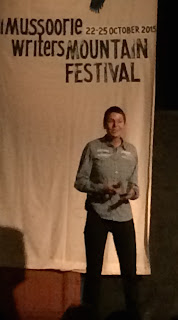 My two hours at the front gate were quite enjoyable; people kept arriving. It was quite cool in the shade, but too hot in the sun. Dan brought my jacket and friend Eric stopped by with a cup of tea. The usual traffic on the road was disturbed by all the extra vehicles parked around! 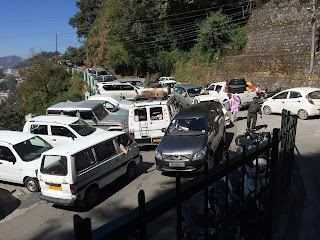 From 11:00 to 2:00 there was a Mela (generic word for festival) in the Quad. There were booths selling a variety of food, handicrafts and other local items. Cambridge Book Depot had a very large booth. I said NO MORE BOOKS and ended up with only four!! [Paro Anand's adult comic novel Pure Sequence, about four Indian women in a retirement community; Steve Alter's latest, The Secret Sanctuary, for young readers, set in the new Jabarkhet Nature Sanctuary, formerly Flag Hill; The Himalaya Club by John Lang, Australia's first author, who is buried in the Camel's Back Cemetery; and A Children's History of India by Subhadra Sen Gupta, quite fat but an easy read] 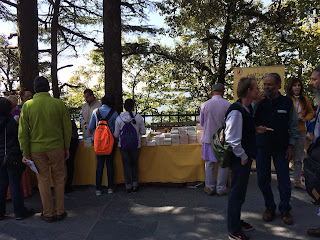 Here is the booth with jam, hats, T-shirts and fleece. Two students did most of the work and I made sure the money was correct. 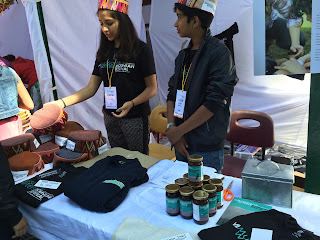 This cleverly decorated balloon was in the Quad as decoration. 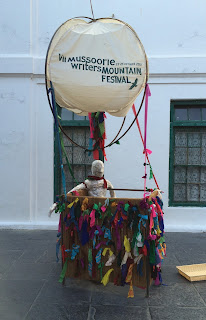 After lunch I went up to hear Bernadette McDonald, the curator of the Banff Mountain Film Festival. She is a writer of books about mountain climbers. I've heard her before and own her book about a woman in Kathmandu who was involved in most of the Everest expeditions for nearly 50 years. Her book this year focuses on climbers from Slovenia. She was followed by one of them, Silvo Karo. The picture below shows a peak in Patagonia. 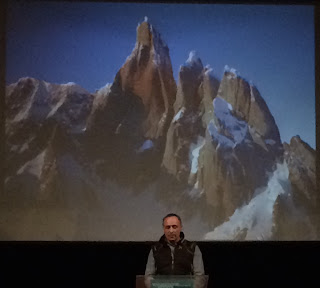 The final session I went to was by Sandesh Kadur and Kamal Bawa, who have done several books together. Their focus is on climate change in the Himalaya. They work with an NGO that has been developing ways to help the mountain dwellers to cope with the rapid changes; one thing they've done is create a cooking stove that is more efficient and has much less smoke emission. The photo below from his presentation shows the Darjeeling train in a snowy landscape. [This one's for you, Laverne!] 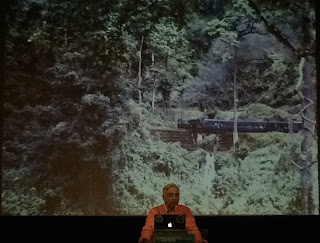 In the evening we walked up to the top of the hill to Sanjay Narang's new house for a dinner with festival participants and guests. It was wonderful and I'll post more about that tomorrow.
Posted by Anne Lind at 9:00 AM