As a birthday gift for Dan a few weeks ago I signed us up for a food tour in the Bucktown and Wicker Park neighborhoods of Chicago. It is an easy day trip for us to go into the city for a day. The South Shore commuter rail line goes from the South Bend Airport right into Millennium Station. We caught the 8:45 train, walked a block to the El, and took two trains to the near northside neighborhood where the tour began. We had a three-block walk to George's Hot Dogs, the starting point and first tasting. We arrived there on the dot of 11:15, as we had been told. 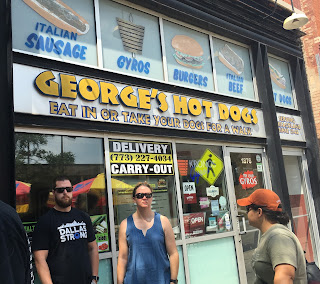 George's Hot Dogs was started in 1948 and they serve the basic Chicago dog:  hot dog, dill pickle spear, relish, mustard, tomato, small pickled pepper, and chopped onions. (One other woman and I had ours without the raw onions.) 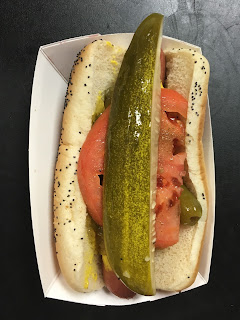 The next stop was a place called Hot Chocolate. Because it is summer, they gave us a slushy cold chocolate; it was the medium, they also have light and dark. The marshmallow was made in-house and was also delicious. The menu for lunch looked really interesting and delicious. 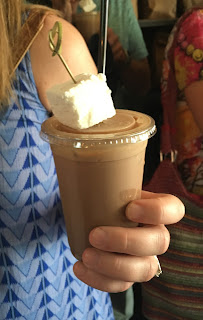 After the chocolate, we left Bucktown and went into Wicker Park. The two neighborhoods are right next to each other. Both started out as manufacturing centers outside the city and gradually added housing. At first artists tended to come into the area as the housing was inexpensive. Now they are mostly very upscale, with homes running into the millions of dollars.

At the Goddess & Grocer deli we had some kale salad. It was so delicious, I ate it before thinking of taking a picture!

We went to a pizza place called Piece. This is not the deep-dish pizza that Chicago is known for, but a thin crust cooked at a very high temperature. The building is a former lumberyard and they have made great use of the design of the old warehouse. We were seated in a separate area, below the main floor level. 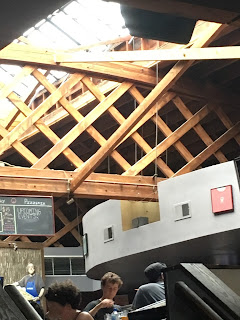 We were served a small piece of margarita pizza. It was tasty. This place is also a microbrewery, so there was a tasting of beer. But they provided root beer for those of us who don't drink alcohol (unfortunately not brewed in-house, but delicious anyway!). 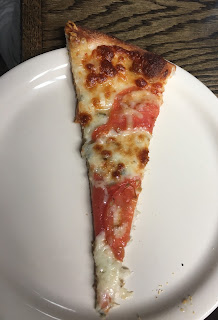 After the pizza, we headed into a residential area, including Wicker Park itself, a nice oasis in the city. As soon as we left the main street, it became quieter.  We saw homes that were old and not yet renovated, as well as some more newly-built ones. 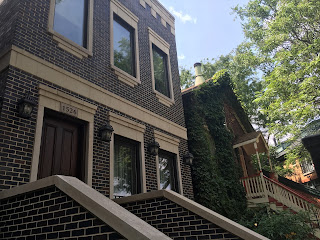 This Victorian home has recently been completely renovated and it is stunning. Our guide told us there is a ballroom on the third floor. 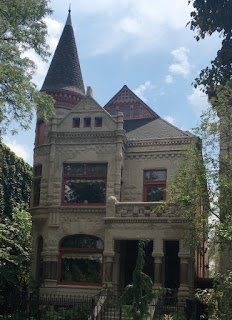 At this point, I was feeling the heat very much and took a break on some grass while the rest of the group looked at a few more homes. Dan and I met back up with them at the next stop, Sultan's Market, a  middle-eastern deli. We had a falafel sandwich there and lots of water. I wrapped up my sandwich to take home; the heat had completely taken away my appetite.

The last stop was Stan's Donuts, where we were given a fresh plain glazed doughnut. Again, I put it in my bag for later.

We were glad that Stan's was right beside the El station and we were able to go up and get on a train. This time we had a few more blocks to Millennium Station, so we walked through Macy's for the cool air. It made me nostalgic for the old Marshall Fields, where we sometimes shopped back in the 1960s.

We went to some fabulous places and would consider going back to the neighborhood. It was an easy train trip from the Loop. The two delis and the Hot Chocolate were the most outstanding. I can definitely imagine returning.