Last year at this time I was inspired by my daughter's regular blog about the books she reads each month (click here). I don't read as many as she does, but my life always has a book going. So I'm going to tell you about the ones that I most enjoyed and that stayed in my mind from the past year. I've kept a list since 1998 and am amazed to see that I have read more than 1200 books in those years.

Maisie Dobbs series by Jacqueline Winspear. I was partway through this series about a psychologist/ detective last year at this time. I finished all the published books around April after the most recent one was published. I can't remember when I've been more engrossed in a character or read about one with so many interesting facets. If you haven't read this series, I can highly recommend it. I also read the author's stand-alone novel The Care and Management of Lies,  a poignant story set in World War I about a young farmer's wife who had to keep things going while her husband went away to war. She writes to him about all the wonderful meals she is making. The letters are very creative although untrue, and the husband reads the descriptions of the feasts to his fellow soldiers in the trenches.

Anne of Green Gables series by L. M. Montgomery. Written in the early 1900s, these books are classic children's literature, although only the first is about her childhood. My daughter set up a Facebook reading group of her friends to read the entire series, one a month. There is only one more to finish. I enjoyed the process thoroughly; it was good to reread those that I sometimes skip when going back.

Seven Sisters by Lucinda Riley was a Christmas gift and the start of a new series. Each book is about one of the daughters adopted by an unusual, wealthy man. Their father dies and leaves them clues about their various obscure origins. The first two books send you to Brazil and France during the time of the creation of the Christ the Redeemer statue and to Norway for a mysterious connection to Grieg. I can't wait for the rest of them!

Nevil Shute is one of my favorite authors (I might have said this before!). This year I reread A Town Like Alice,  probably my favorite. For the first time I read Slide Rule, his autobiography. It focuses primarily on the creation of the Airship R100, which proved more interesting than I expected. There isn't much in it about his personal life. That leads to:

Flight of Dreams by Ariel Lawhorn, which is a fictionalized version of the last flight and crash of the Hindenburg airship. The depictions of the characters was wonderful. She did a lot of research and most of the characters are drawn from history. Very enjoyable and educational.

One of my favorite painters is Botticelli, especially his painting Primavera. I happened upon Marina Fiorato's book The Botticelli Secret and enjoyed it immensely. She imagines a story based on the painting where each person stands for a different city-state in Italy. A prostitute and a monk work together to solve the mystery of a conspiracy among them.

Still Alice by Lisa Genova is a moving portrait of a woman who studies the mind and realizes she has Alzheimer's disease. I haven't seen the movie.

I've heard of R. L. Delderfield for years, an English author of the mid-20th century who writes long books. I finally read God Is an Englishman and thoroughly enjoyed it. I have To Serve Him All My Days on my reading list for this coming year. And, no, I never saw the BBC series based on it.

I listened to The Storied Life of A. J. Fikry by Gabrielle Zevin, who also wrote Elsewhere, among others. This tale of a lonely bookshop owner who finds a baby is wonderful.

The Curious Charms of Arthur Pepper by Phaedra Patrick is about a widower who finds a charm bracelet long hidden by his late wife. He follows the charms to learn more about her life than he ever knew.

Frerick Backman wrote two books I enjoyed this year -- Britt-Marie Was Here and A Man Called Ove.  Both are set in Scandinavia and have lead characters who are lonely but find a new way of life. Absolutely charming.

Two books set in historical settings were Enchanted Islands by Allison Amend and Twelve Rooms of the Nile by Enid Schomer. The first is about settlers on the Galapagos and the second about the meeting of Florence Nightingale and Gustave Flaubert while traveling in Egypt in 1850.

Kristin Hannah's The Nightingale is about two French sisters during World War II in France; one billets a German soldier in her home and the other leads downed Allied airmen to safety.

The Distant Hours by Kate Morton is about three strange sisters who live in a castle in England and take in a child during World War II. Much of the story focuses on the child's memories and reconnections as they are discovered by her daughter, who never knew the story.

While I was in India in the fall I put several books on hold at the Goshen Library, so I had a busy time in November and December catching up with all of them. One after another made my "best of" list.

News of the World by Paulette Giles made multiple lists of the Best Books of 2016. It tells about a crusty old man who makes his living traveling around frontier Texas reading from newspapers to the populace for entertainment. He is given a 10-year-old girl rescued from Indian captivity to return to her relatives. One of my favorites.

Also on those lists is Homegoing by Gyasi Yaa. It follows two sisters from Ghana -- one who stays in Africa and one who becomes a slave in America. Wonderful.

Another is Commonwealth by Ann Patchett, an excellent author. Tangled lives of step siblings.

Slighter but delightful was Bookshop on the Corner by Jenny Colgan. Nina creates a new life for herself by moving to Scotland, purchasing a van, and creating a mobile bookstore.

In Julie Berry's The Passion of Dollsa three sisters' lives become entangled with a mystical heretical woman in 1241.

I wanted to love Swing Time by Zadie Smith (also on many best-of lists) but didn't. I'm not sure why, if it was the timing (packing to leave) or it just didn't resonate with me. I've enjoyed her earlier books very much.

Wishing you good reading in the year ahead!
Posted by Anne Lind at 7:49 AM No comments:

Heading Back to Chiang Mai

We are beginning our third winter in Chiang Mai, Thailand. We are feeling quite at home here now and it's nice to be recognized by some of the neighborhood people.

We spent five days in Spokane, WA, with our son Dirk and Tracy and the family. We had asked for no gifts that we would have to carry with us and they complied:  Dirk gave us each a massage, and we four went out for a dinner on Friday night that was wonderful. It was a set course dinner and we had ten (fortunately small!) courses. They were all unusual and delicious. Many games were played and we were very happy to spend time with all of them.


Early on Wednesday morning (28th) Tracy got up and took us to the airport. We had a short flight to Seattle on Alaska Airlines. When we arrived at the checkin counter, there was a huge line as the 7:00 flight had been cancelled. Fortunately, we were on the 8:30, so checked in, got some breakfast, and headed further west. I took this picture out the plane window; I'm guessing it is probably the Columbia River. 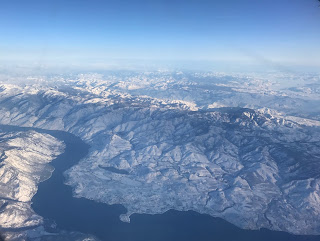 After a comfortable several hours in the lounge, our Korean Airlines flight left for Seoul. It was about a 12-hour flight. I watched two movies (Cafe Society  and Genius) and slept for about 5 hours. We had a very tight connection in Seoul and we landed somewhat late. We hurried through the airport (fortunately only about 4 gates away) and made it on as final boarding was being called. I don't know if we were the last, but we were happy we didn't miss the flight. Then there was another delay as the heating/cooling system needed attention. But we didn't mind! I tried not to sleep and watched two more movies (Howard's End and West Side Story). The last one ended exactly as we hit the runway in Chiang Mai. It was light for much of the way and the scenery was amazing. We flew over eastern Russia and across China.

Our bags all made the transfer, thankfully! The wait for a taxi at the airport was long, as usual; there never are quite enough of them. When we got to our hotel, we were happy to learn that we will be able to get into our apartment today (30th) instead of waiting until the 1st, as the previous tenant has moved out early. So just this one night in the sister hotel and we can get settled.

This evening we meet up with my daughter and her husband, who are out on a tour today.