Sunday we had signed up for a group tour, which we have so far managed to avoid. But we thought we’d like to get out of Florence since we are here for a week. This was a big tour — Pisa, Siena, and San Gimagniano, with lunch at a winery. It was a long day, but we enjoyed the sights very much. Our guide was Claudia and she was very good.

First stop was Pisa for a look at the famous tower. We walked completely around the cathedral, baptistry and tower, but didn’t go inside. It was pretty amazing to see something so well-known, an icon of Italy. The baptistry in Pisa was very large, taller than the cathedral itself. (They had a separate building for baptisms, as unbaptized people were not allowed inside the churches.) 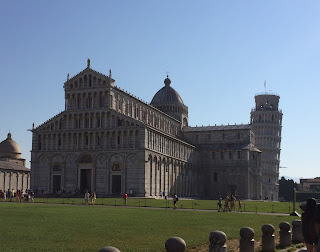 Our meeting point was between the cathedral and the bus area, so Dan and I walked back and had some Indian tea and a samosa at a little shop right by the meeting point. Very relaxing and quite good.

The drive began to look more and more like the Tuscany of the movies, rolling hills, many vineyards and olive groves, with cypresses dotting the landscape. There were also fields of sunflowers as we had seen earlier on the trip. Our lunch place was at the top of a hill at a farm restaurant. They served bruschetta with tomatoes and salami, pasta, and a panna cotta with a small chocolate cookie. Wine and water on the table. It wasn’t quite up to the standard of the special meal we had on the Amalfi Coast, but it was good.

After lunch we drove to San Gimignano. This has to be one of the most picturesque places in the entire world. The town sits atop a high hill, surrounded by a wall. There are many towers in the town, although not as many as there once were. When the plague devastated Europe in the 14th century, the town was deserted for ten years, and some of the towers deteriorated. We walked up to the fortress. There were amazing views in every direction. On the way back through the town, I had some gelato at the world-famous Gelateria Dondolo, which won the prize as the best gelateria for 2015 (and some previous years). The mango and mixed berries were both delicious (we learned in Rome that you must have more than one flavor in a serving). As we gathered at the meeting point near the bus park, we were all happy to find a water fountain.

Our last stop for the day was Siena, another medieval city with an interesting cathedral. Here buses can’t go into the city and we had the longest walk from the bus to the central piazza, about a mile and a quarter. As we walked into the town, we heard drums and then saw a parade with flags and many followers wearing scarves. We learned that the city is divided into 17 areas and each is identified by an animal and special colors. This was one of the Sundays where two divisions were marching around. They were the porcupines and lions. We saw them again later on. Then we walked up further to the cathedral and had a tour of it. This was the only time we actually toured a sight as a group; we had receivers so we could hear the guide through earphones. The cathedral was very unusual, with multicolored marble inlaid floors. They are usually covered by gray rugs so chairs can be put in, but we were fortunate that this time of year is when they are uncovered. Surprisingly, they are mostly honoring wisdom and myth — Socrates and others are depicted. Some have more Christian themes. There is a side room full of frescoes related to Pope Pius II and/or Pius III (I was a bit confused; both popes were from Siena and both served very short terms). These frescoes have been protected for six centuries and are amazingly bright and beautiful. They were painted by Pinturicchio, and the designs probably were done by Raphael. The room also had many music manuscripts displayed; they were very large and beautiful, but covered by glass so photos didn't take. The pulpit was ornately carved. It has not been cleaned, but you can still see the intricacy of the carvings. We saw many organ pipes, but couldn’t find the console anywhere.

After the cathedral, we went back to the main piazza and had some refreshment at a restaurant, overpriced, but worth it for the sitting and the people-watching.

When we went to San Marco, we stopped to get 9:30 entry tickets for the Accademia on Saturday. It was very nice, as we entered through the reserved door and got right in. However, this was the very first church/museum that we visited where there were many people already there. It was quite crowded, and of course they clustered around Michelangelo's famous statue of David. There are several copies of it around the city and there are other Davids by Donatello and others. But this one is truly sublime. It is amazing to walk around it and see how Michelangelo was able to take a tall piece of marble that was rejected by other sculptors and pull out of it this incredible figure.

Entering the main hall, you can see David at the end of the room under a dome specially designed for him. He glows. The hall is lined with six unfinished statues by Michelangelo, called "The Prisoners" because the figures seem trapped in the marble.

After watching the David for a while, we went into a special exhibit of paintings related to Saint Frances and his life. No pictures allowed. There was also an interesting display of musical instruments, which we enjoyed a lot. We both spent some time at the computers that were set up with historical music information, including sound samples. Very interesting.

Following the Accademia, we went back to the hotel and eventually had lunch again at the Central Market. I don't think I did much in the afternoon, but Dan went out again and got our tickets for the Duomo visit on Monday.

Did I actually say recently that I wasn't much into sight-seeing any more? I think that was before I got back to Florence. This must be one of the richest cities in the world for art. Of course it was the center of the Renaissance and that is what is on display here. We've been seeing two major churches or museums each day and there is so much to show. So here comes another Saturday post.

Friday afternoon we went to the church of Santa Maria Novella. This was the first thing we saw when we came out of the train station; it is right in front of it (in fact, the train station is called the SMN station). Since it is the closest monument to our hotel, we didn't want to miss it.

We have been very fortunate in visiting all these places. We have never felt crowded or like there were too many people to get a good look at everything. However, today at the Accademia, there many, many people all over (except in the musical instruments area, which was of particular interest to us). I'll post about that tomorrow.

This church was highly decorated with frescoes, perhaps as many or more than in the Sistine Chapel. Ghirlandaio as well as others are represented, in fact the list of names has many familiar to those who have studied late Gothic and early Renaissance art. Below is a view of the altar and the apse. You can see that the walls are covered with frescoes, mainly from the life of Christ. 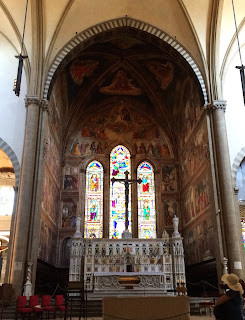 When we were last in Florence in 1971, 44 years ago, one of the sights that stayed with us all these years was the frescoes of Fra Angelico in the Convent of San Marco. This was the headquarters of the Dominicans, a religious order founded in the 13th century. In the first half of the 15th century, Fra Angelico lived here and painted frescoes throughout the building.

Every monk's cell (and there are many) was decorated with a fresco beside the window, conforming to the curved ceiling. There were many scenes from the life of Christ, with more crucifixions than any other. I wonder if he asked each resident what his favorite story was. If you ever get to Florence, you must be sure to go to this place.

Following our visits to the Uffizi Gallery and Santa Croce Church, I need to catch up on food. I know this because I get more comments and email from my readers about my food posts than anything else! So here come a few food shots. I promise not to do three posts every day, but it is hard to keep up with everything we are seeing. (So don't forget to look at the two previous posts!)


We've eaten lunch at the Mercato Centrale every day. It is a huge place with tons of options, all well-priced.