We left Woodstock at 3:00 on Wednesday. The taxi was there waiting when we arrived at the school gate with our luggage. We went straight to the train station, arriving in plenty of time. The train was waiting and we were able to get right on. We had our least favorite seats -- the cars are designed so that all of the seats face the center of the car, with a table between the center ones. There is more leg room and more privacy in the other seats, but we were at the table. There was a group of four young men traveling together who were laughing and talking much of the time. They weren't too obnoxious, it was just a bit annoying.

We are well fed on the train, with a large tea served right after leaving, soup and bread after another stop, and a full dinner after Saharanpur. Then ice cream in a paper cup.

Brij was waiting at the station when we arrived in Meerut. The car attendants were helpful in getting our luggage down. It is a three-minute stop, so you need to be ready to get off fairly quickly. It was good to see our Meerut family again.

Brij is tutoring several students in English conversation. This young man is one of them. He was quite excited to talk with us -- he had seen some foreigners in Delhi but never talked to one! 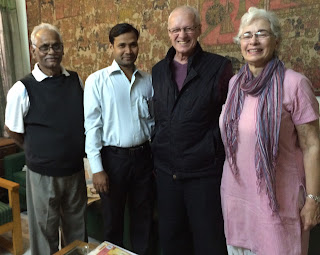 Here we are with Brij and Viola. Viola is recovering from a stroke and doing much better than last year. 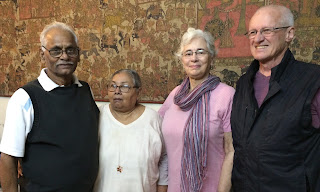 Saturday afternoon we took the Metro to Janpath and the Tibetan Market. I did pick up a couple of things on Janpath, the first time in several years. It used to be a major shopping area for us. Doma was happy to see us, as usual, and ordered tea for us. While we were there, a young man from Moradabad came in with a bag of sample wares he wanted her to buy. It was really interesting watching their interaction. She thought his things were overpriced and not what she wanted, so she didn't order anything from him. The man in the red shirt is her driver, who brings her from her apartment every day about 1:00 and takes her back around 7:00. 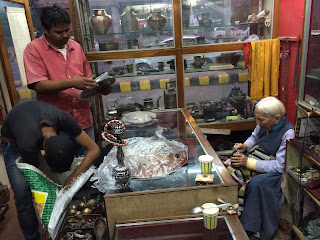 Dan wanted to get some more pocket worry stones, as he loses them (they could be in some of his pockets at home...). They had a good time discussing which ones he should get. She is looking good for her age, over 90 now. 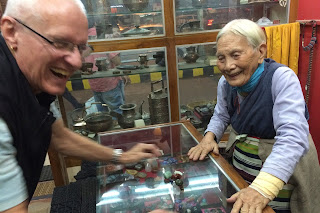 From the Tibetan Market, we went to Mayur Vihar to see Anju and Sandeep. I went in the ladies' car as it was very crowded at 6:00. Dan was in the next one. When I phoned Sandeep to tell him we were on the way, he told us to get off at a different stop than we had before. I worked my way over to where Dan was to tell him, then remembered I had a phone. It was easier just to phone him and tell him! There are seats in every car that are marked for senior and handicapped seats. Someone was always nice to me to offer a seat. One time I was more in the middle of the car where there are no such markings. In a row of young men, only the young woman stood up to offer me a seat. The men never even looked up from their phones.

Sandeep made sure he had some Old Monk rum, Dan's favorite. It wasn't available in Mussoorie this year. I think there's some issue with the distribution in Uttarakhand. 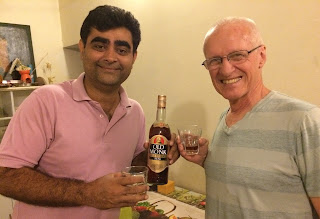 We went to a restaurant named CODE in a nearby mall. We started with a large plate of kabobs -- fish, chicken, sausage, mutton. This picture was taken after we'd already eaten a good amount. It was on a sizzler platter on a bed of cabbage leaves. After we finished the meat, Anju and I both ate the cabbage, which was infused with the flavor of the drippings, delicious! 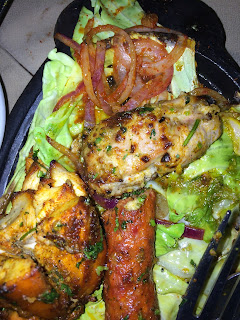 Today is Sunday and we are hanging around until our plane goes out late tonight. We keep our hotel room for the night so we don't have to wait somewhere else and we can shower and change just before our taxi comes at midnight. We'll be home late Monday afternoon!


Thanks for following. Check back here about Christmas time for our next trip -- Korea and Thailand.
Posted by Anne Lind at 12:41 PM No comments: