Snow on top of snow on top of snow. Last week the trucks pushed back the piles to make room for more. This was taken right outside our front door just before noon Wednesday, February 5, 2014. 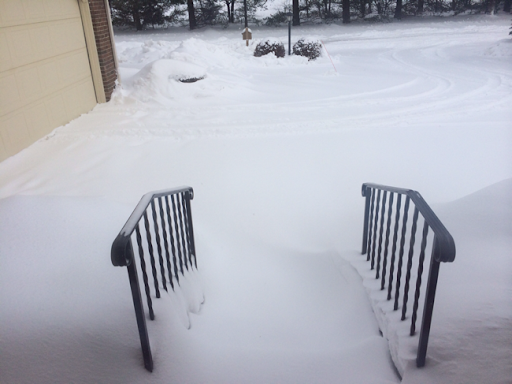 A little over two weeks after we returned from our Ireland trip, we went to Hot Springs, Arkansas, for a week. Some dear friends had given us a week in a time-share condo that they couldn't use. It is a place we had never been, so we were happy to accept. The first morning we were there, I woke up with a terrific pain all down my left leg. I've had sciatica and other back issues off and on over the years, but this pain was definitely more intense. It didn't respond to the exercises I do that usually decrease the pain. Fortunately, I had a walking stick along (having hopes of taking some walks on the trails in the park), which helped me get along.

That afternoon we went downtown to the National Park Headquarters area and visited the old spas there. I decided to try one of the treatments, and it was wonderful. The building was from 1912 and in fine condition, but not modernized. The full course was wonderful, starting with the bath and ending with a massage. It is described here if you'd like more information. It all felt wonderful, but didn't decrease my pain.

The next day it hadn't improved, so I called my sister Becky the N.P. She said the only thing to do was to go to an E.R., but it might not be helpful. They would be reluctant to give strong pain medicines to someone passing through. So we decided to head home. We left on Tuesday afternoon and got back on Wednesday late afternoon. I spent the entire time lying in the back seat on my right side. I had a few pillows and was pretty comfortable except when we stopped and I had to go to the motel room or for a rest stop. We went straight to the Goshen Hospital E.R., where we had to wait for an hour or so. It was a busy place. A doctor checked me out and gave me some prescriptions, which we picked up and went home. Over the next six weeks or so, I saw my regular doctor, two orthopedists, pain clinic doctor, had an MRI and an X-ray, and was scheduled for surgery on December 6. I had severe lumbar spinal stenosis and a ruptured disk.

I had surgery at Goshen Hospital, where they fused L3, L4, and L5 to the Sacral area. Four days later, I was moved to the Elkhart Hospital Rehab Unit. I was there ten days. The therapists and nurses were excellent and I made good progress. I had to learn to dress myself using an arm-length grabber, use a walker correctly, and do some exercising. I was home in time for Christmas, when our daughter and son-in-law came to be with us.

Since Christmas I have gradually improved. I have had a lot of pain in my right hip, making it difficult to sit. At my six-week postop checkup, we learned that one of the screws had pierced the pelvic bone and it was taking longer to heal. By now, at two months postop, it is much better. I can sit (with a cushion) without as much pain, so I can tell it is healing. I have been able to move from using a walker to getting around with a cane, and even without the cane for shorter distances. (The wheeled walker is good for transporting things, though, so I keep it around.) I've been out of the house for various medical appointments, but not much else. Last week Dan began taking me more places, and we even went out to lunch. This week I have a goal of getting out daily, starting with a library trip this afternnon. As I write this, it is February 4, and I have a checkup tomorrow. I hope the doctor will be pleased with my progress.

This has been a difficult experience, but greatly helped by Dan and our house guest Darab, who have been handling everything around the house, especially managing the kitchen, grocery shopping, meals, and clean-up. Dan and I are leaving for a long-planned trip to New Zealand and Australia on March 12. I may not be back to my full pre-surgery self, but I should be able to manage. The long flight on Air New Zealand will be difficult, but we are in Premium Economy, and the seats are more comfortable than regular economy. I'm so glad we had decided to book those seats; little did we know at the time how grateful I would be for a little more comfort!

Check back here in mid-March if you want to follow our trip!