Friday morning we were at anchor in the river for most of the time waiting for the border patrol officials to come. Sam, our purser, had all our passports and had done the piles of paperwork for leaving Cambodia and entering Vietnam (we had to get visas for Vietnam before we left home). He did all the work and we loafed around.

In the afternoon we came to Chau Doc. We met our Vietnamese guide, Dui, who will be with us for the rest of the time. He is a lively person and a good guide. Again, we four Americans tour around on our own, leaving the larger group of French people to their own guide.

We visited a Cham village. These people are primarily Muslim, refugees who came from the north.


The building below is a communal center, which is found in every village. No one person's house is to be larger than this building. Many events are held here, including weddings. 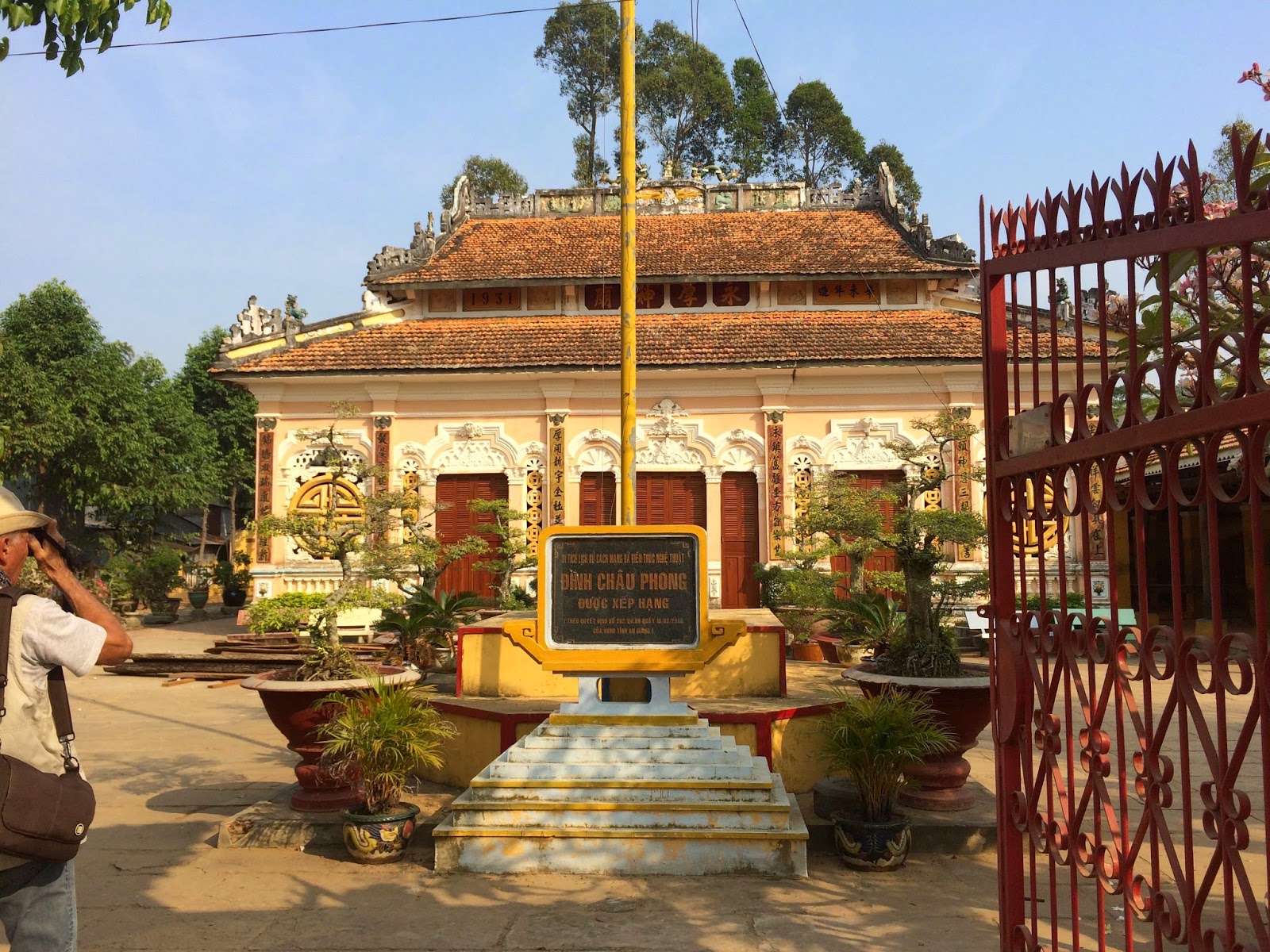 After the village, we took vans up a nearby mountain, about 280 meters high. Everything else is low-lying and it gave a wonderful view all around the countryside. Unfortunately, it was quite hazy, so photos aren’t that great. Acres of green rice paddies were in every direction. We could see the Cambodian border, where Vietnamese workers can cross over to till the fields. 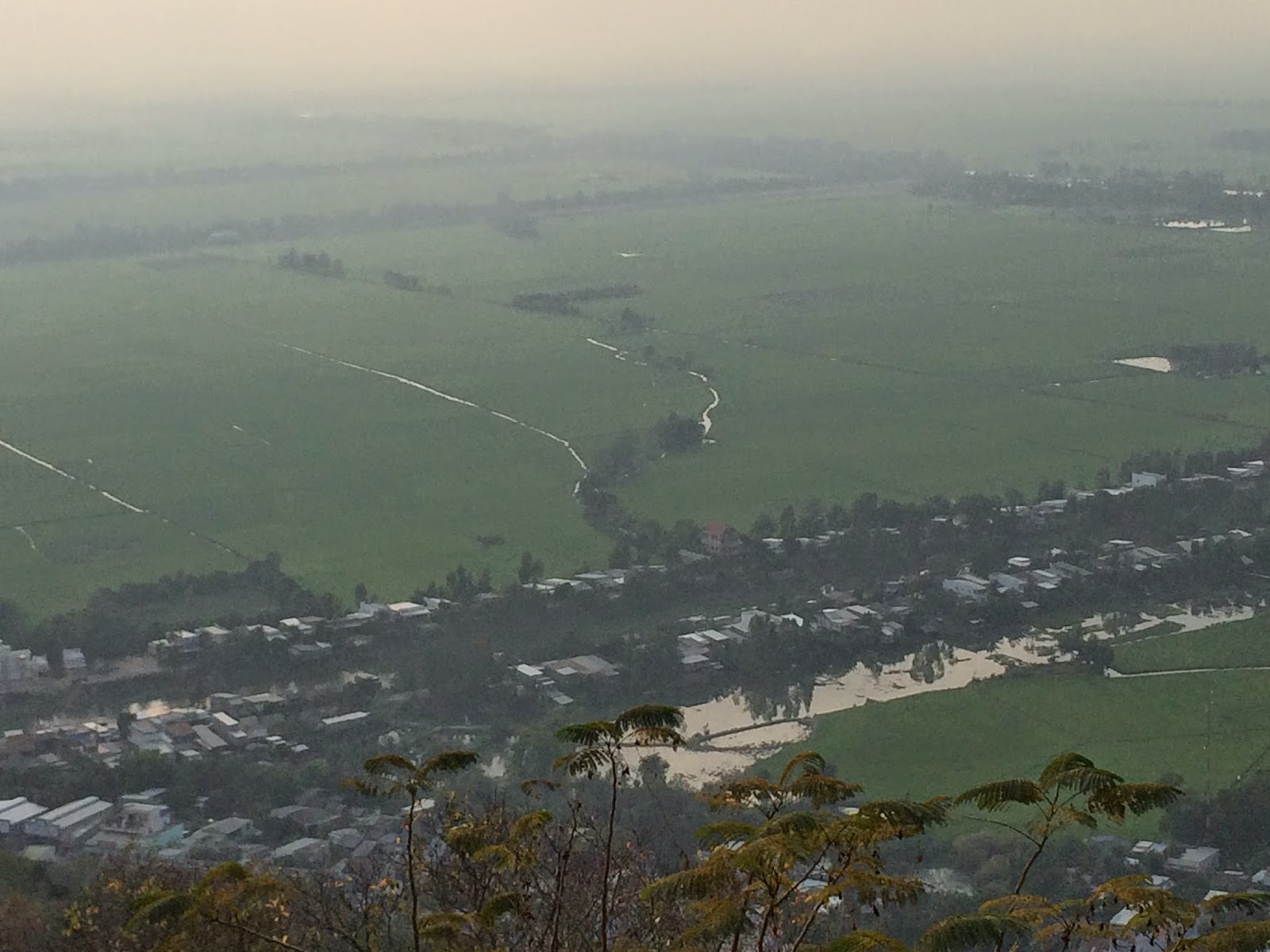 A family lives here. There is a military station on the mountain; they probably live by working for them and selling food to tourists. 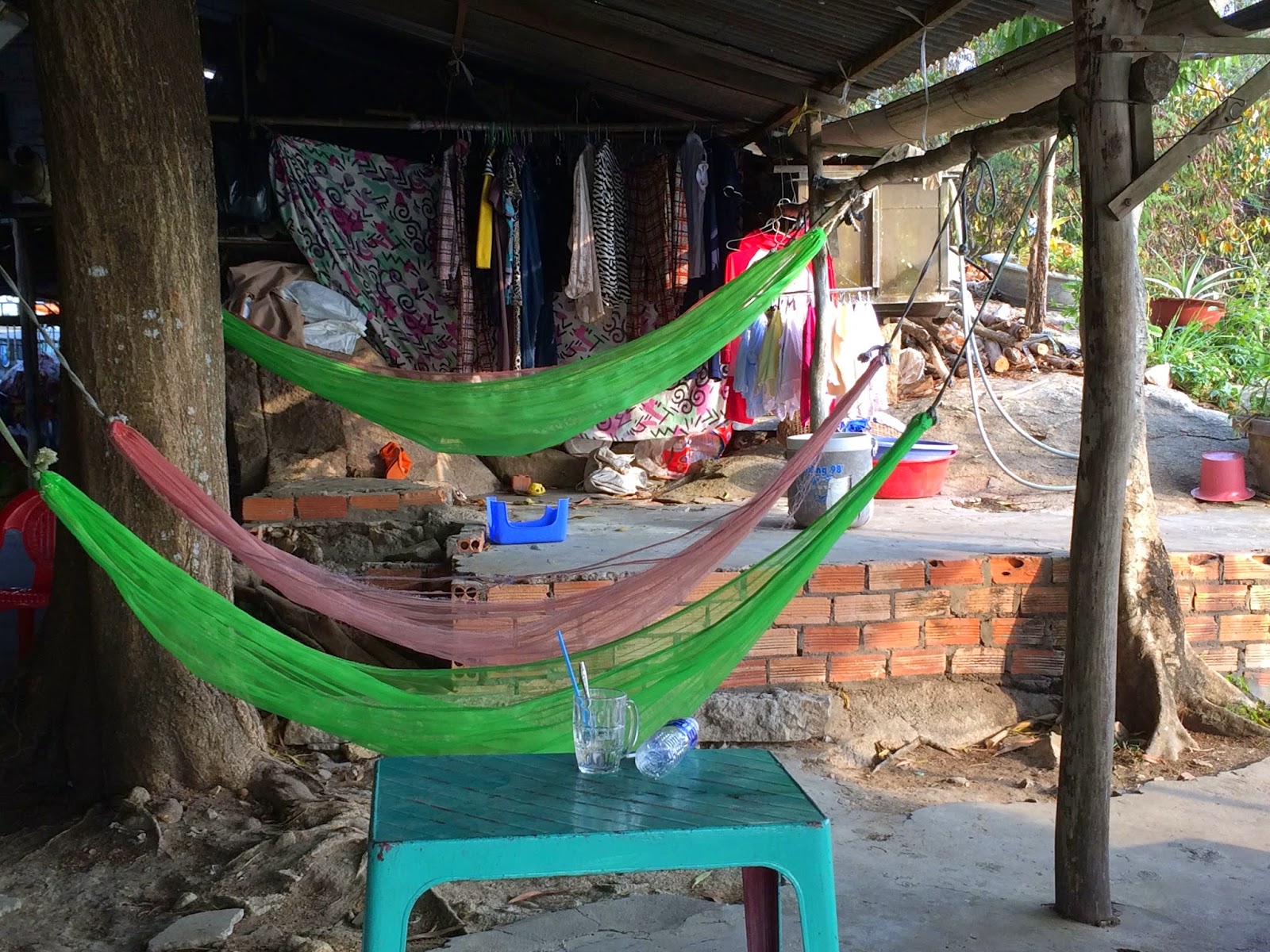 It is clear that Vietnam is further along in development than Cambodia. Although they clearly suffered much from the war, they didn’t lose an entire generation of intellectuals as Cambodia did.

We took a wonderful walk through very narrow pathways into the market area of Chau Doc. And at the end we visited a shrine. A picture outside is of a female who became a monk and everyone thought she was male. At one point a pregnant young woman named her as the father of her child. The monk never said anything against her. Much later when she died, they discovered her true gender. Now she is venerated and her picture has her with a young child.

The children in the Vietnam towns we've been in seem very friendly and happy. They all wave and say hello. This children were playing around outside the temple and loved it when I took my camera out. I tried to ask the little one how old she was, and the tall boy started counting one-two-three-four-five in English. He was proud of himself, but it didn't help me figure out their ages! 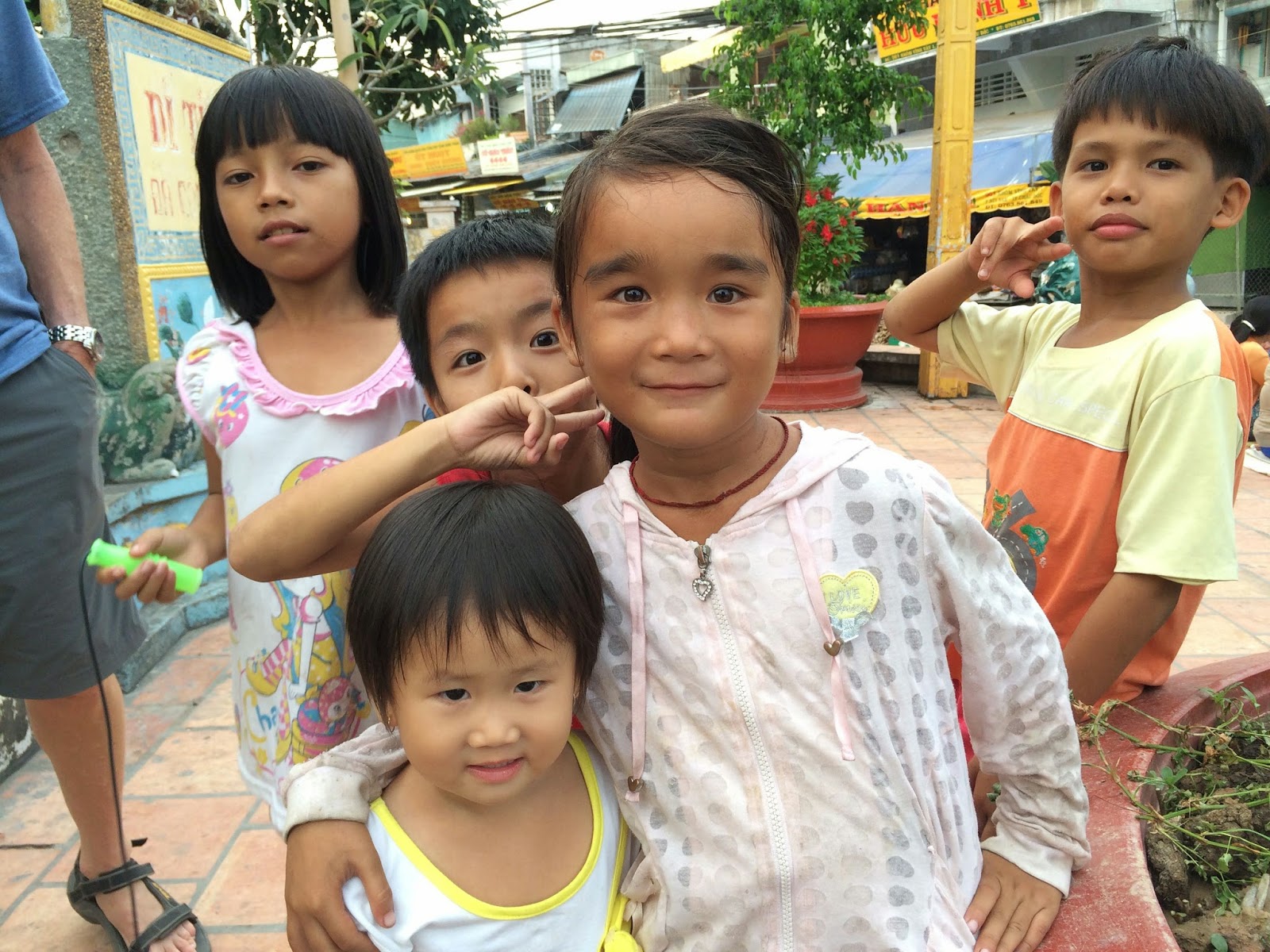 A correction is needed:  our ship is the Toum Tiou II; I misspelled it earlier. The food has been quite good. At breakfast we have a buffet of fruit, meats, breads (delicious fresh croissants) and eggs made to order. Lunch is also a buffet, often with soup, always two or three unusual salad combinations, rice with three dishes (two meat, one vegetable), and fruit for dessert. Occasionally there is an addition to dessert; today we had pineapple fritters with honey. Dinner is served family style, with tables of six. We are now at a table for four with Tom and Gayl, the American couple. We are having a good time. They are keeping us very busy with excursions morning and afternoon. Today (Saturday) I am taking the afternoon off and just resting. The others all went off on a small boat to another pottery and floating market.
Posted by Anne Lind at 2:34 PM 1 comment:

Thursday morning we set off right after breakfast for a tour of the Royal Palace and Museum. The current king is Norodom Sihamoni, a son of the former King Norodom Sihanouk, who ruled for many years. The palace compound has many buildings. Two guards were posted at the entrance, one talking on his cell phone and this one looking at his. This probably wouldn't be allowed at Buckingham Palace! 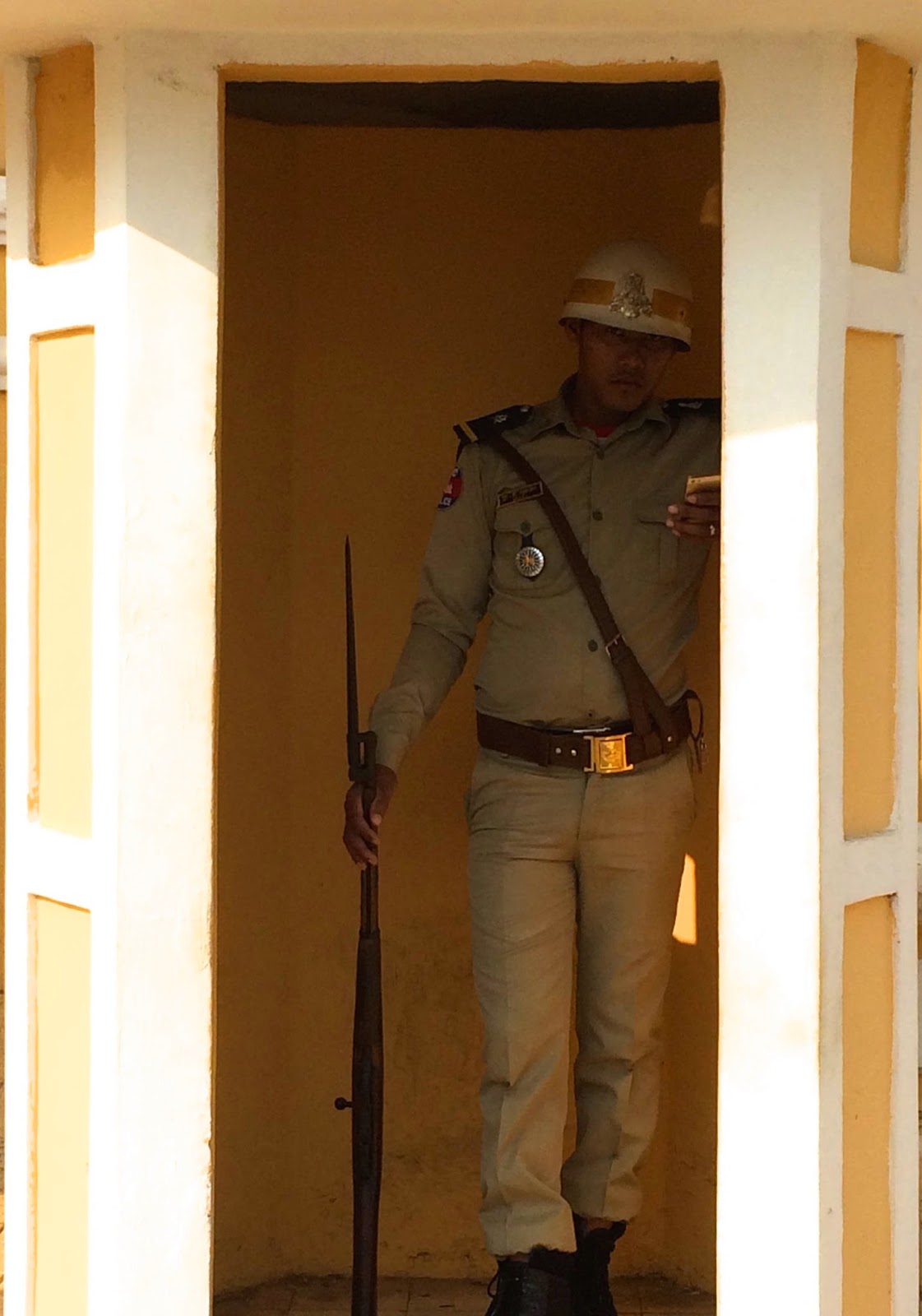 We went inside the pagoda, but no pictures were allowed. There was an emerald Buddha and many artifacts in cases. Our guide said it was unclear whether any of the jewels were real; they suspect the Khmer Rouge may have taken them and replaced them with fakes.

At the pagoda we ran into Les and Ilona, the American couple who had left the ship the day before. Hugs all around as if long-lost friends.

Another building had a variety of displays. This one was especially interesting, showing the color that should be worn each day. At one time the people followed, but they have more freedom now. It was Thursday and the officials at the museum had on dark green, so I'm guessing that on the grounds they choose to follow the daily color. 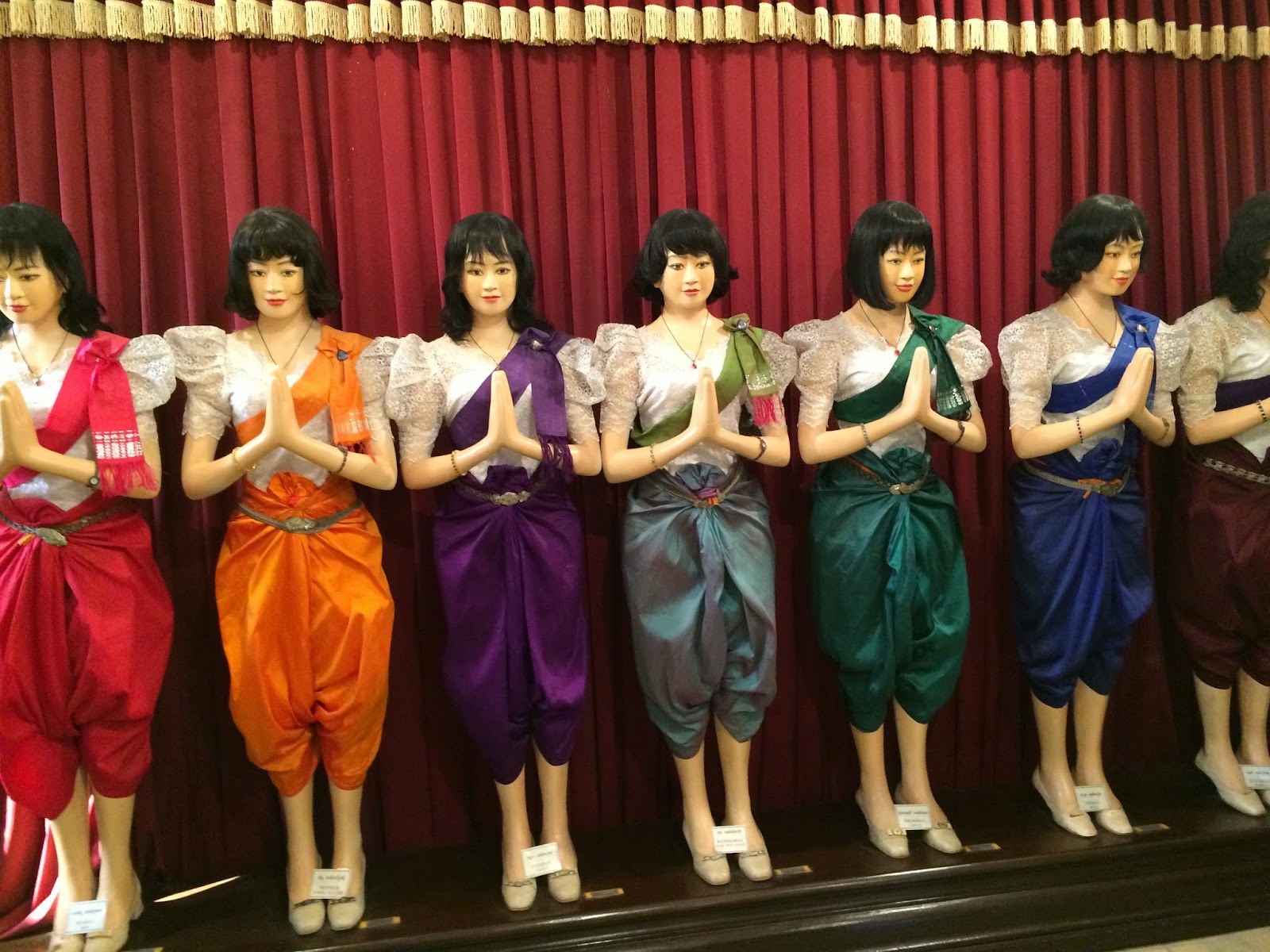 There were many stupas on the ground holding cremated remains of various rulers. This is the one of Norodom Sihanouk, one of the longest-serving. 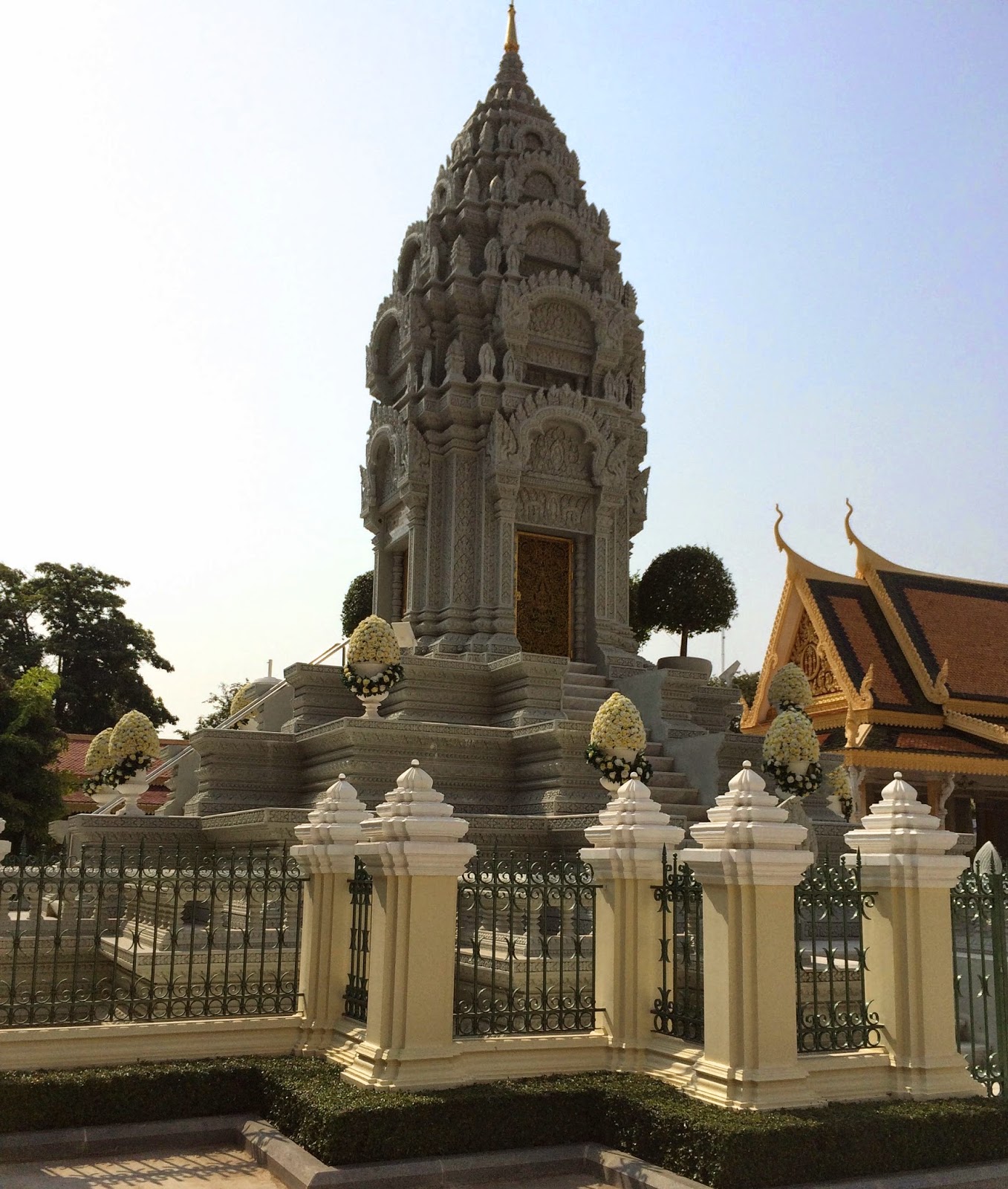 Near the exit we were happy to find comfort facilities. In my stall I couldn't resist taking a picture from the wall, demonstrating how to use the western toilet. 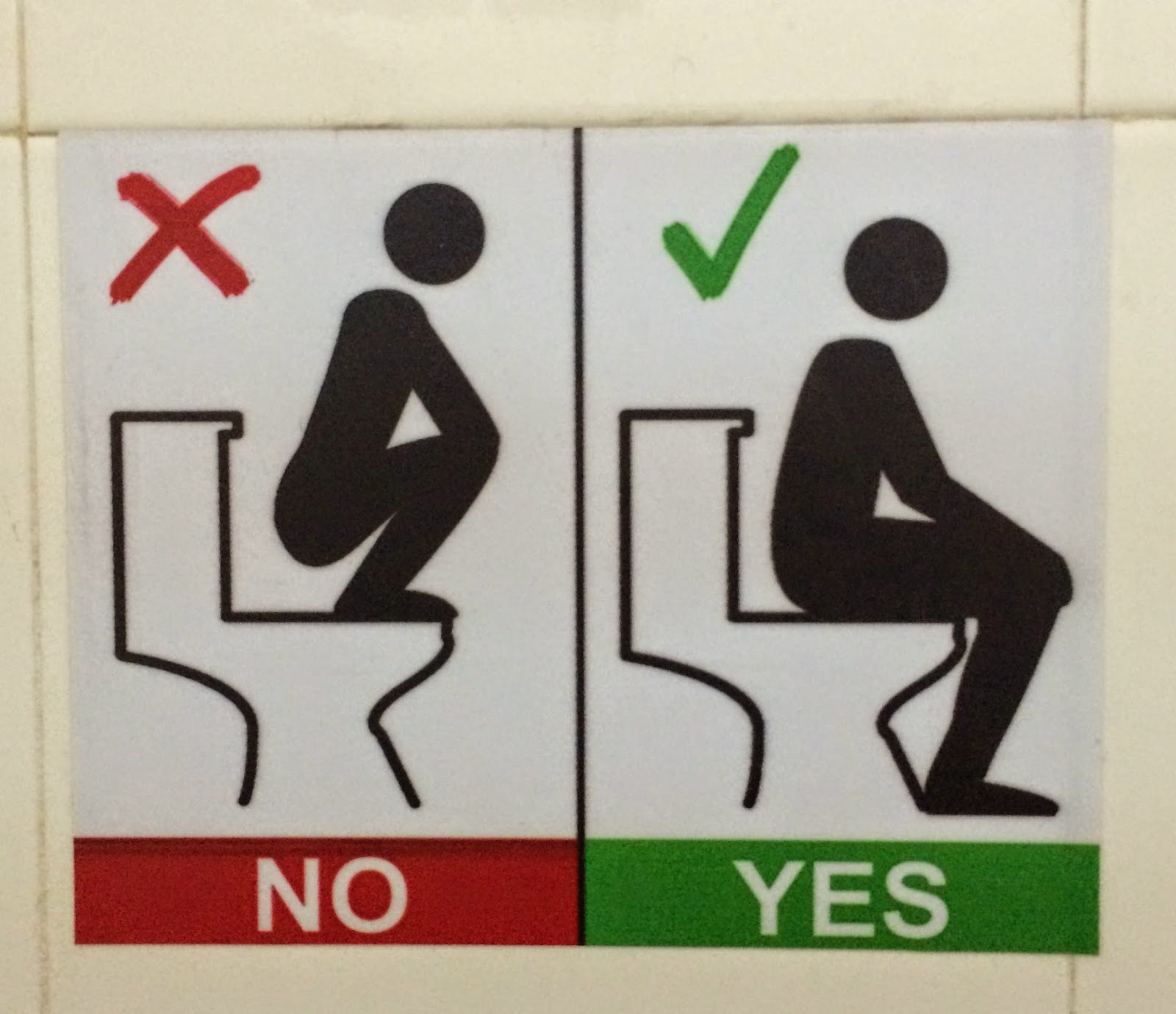 There was a display of royal palanquins and other items near the exit. 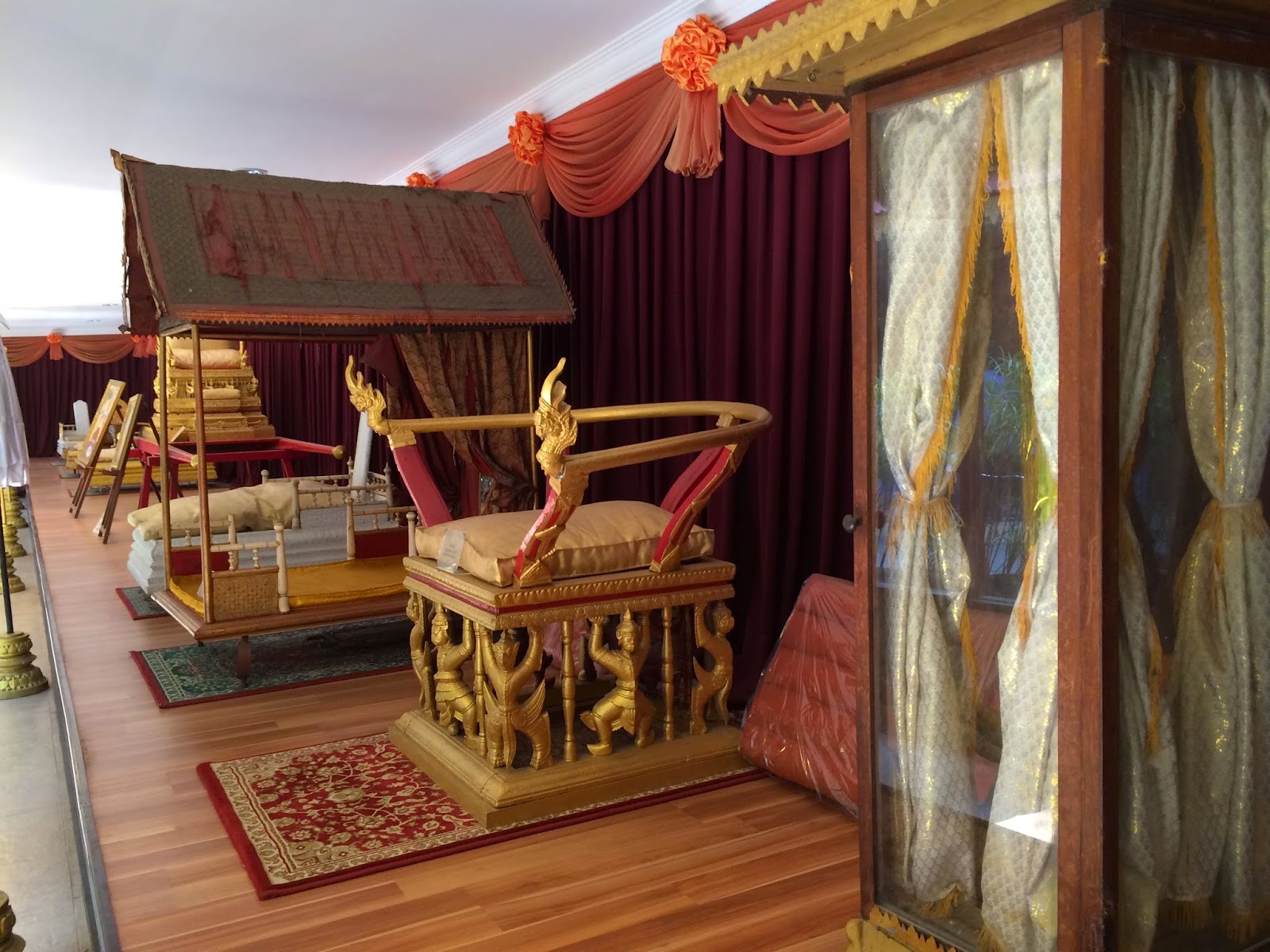 From the palace we walked a couple of blocks and went into the National Museum, another lovely building. 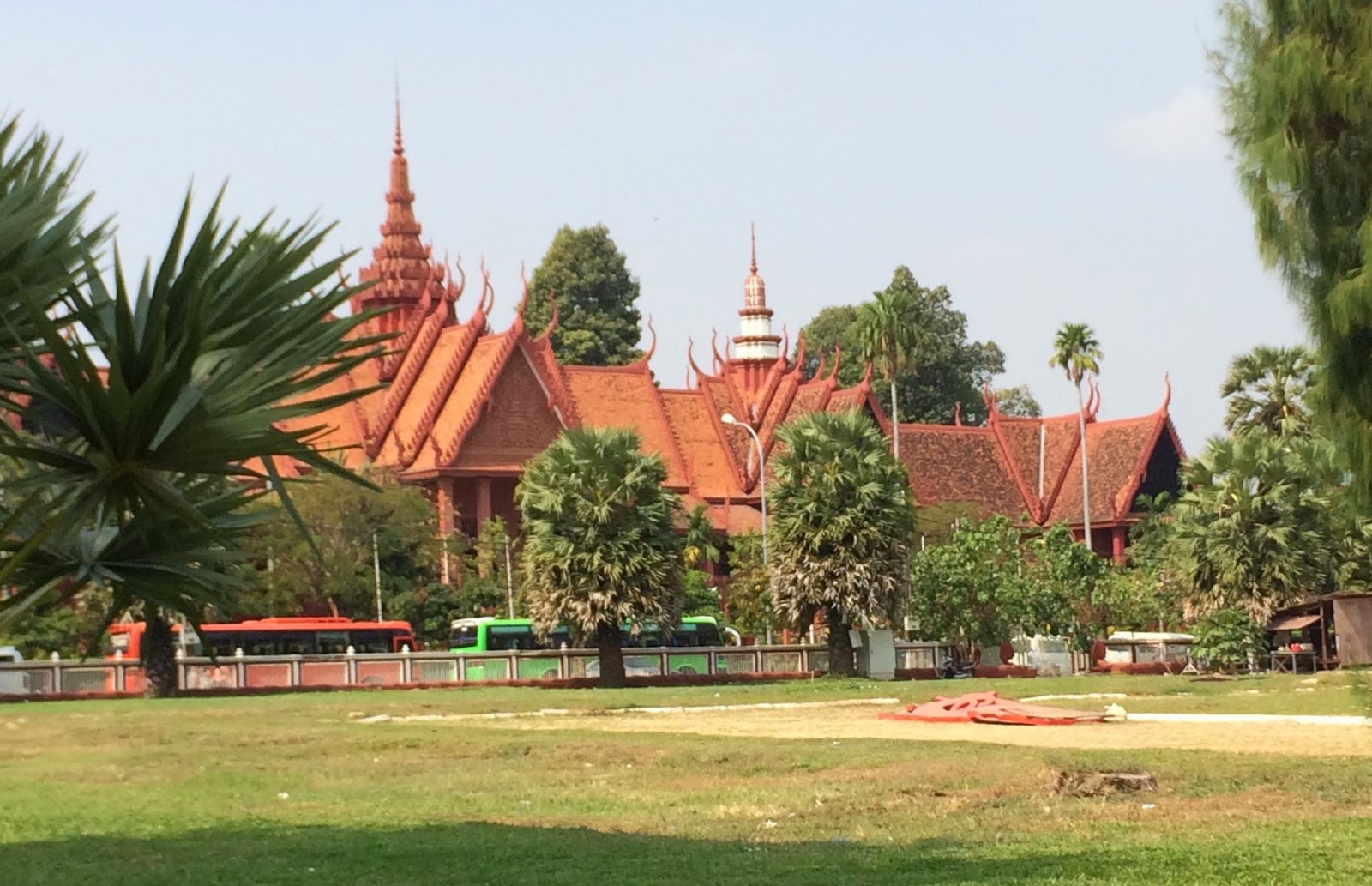 Several Buddha statues had women offering flower sticks that we could take and put as an offering. 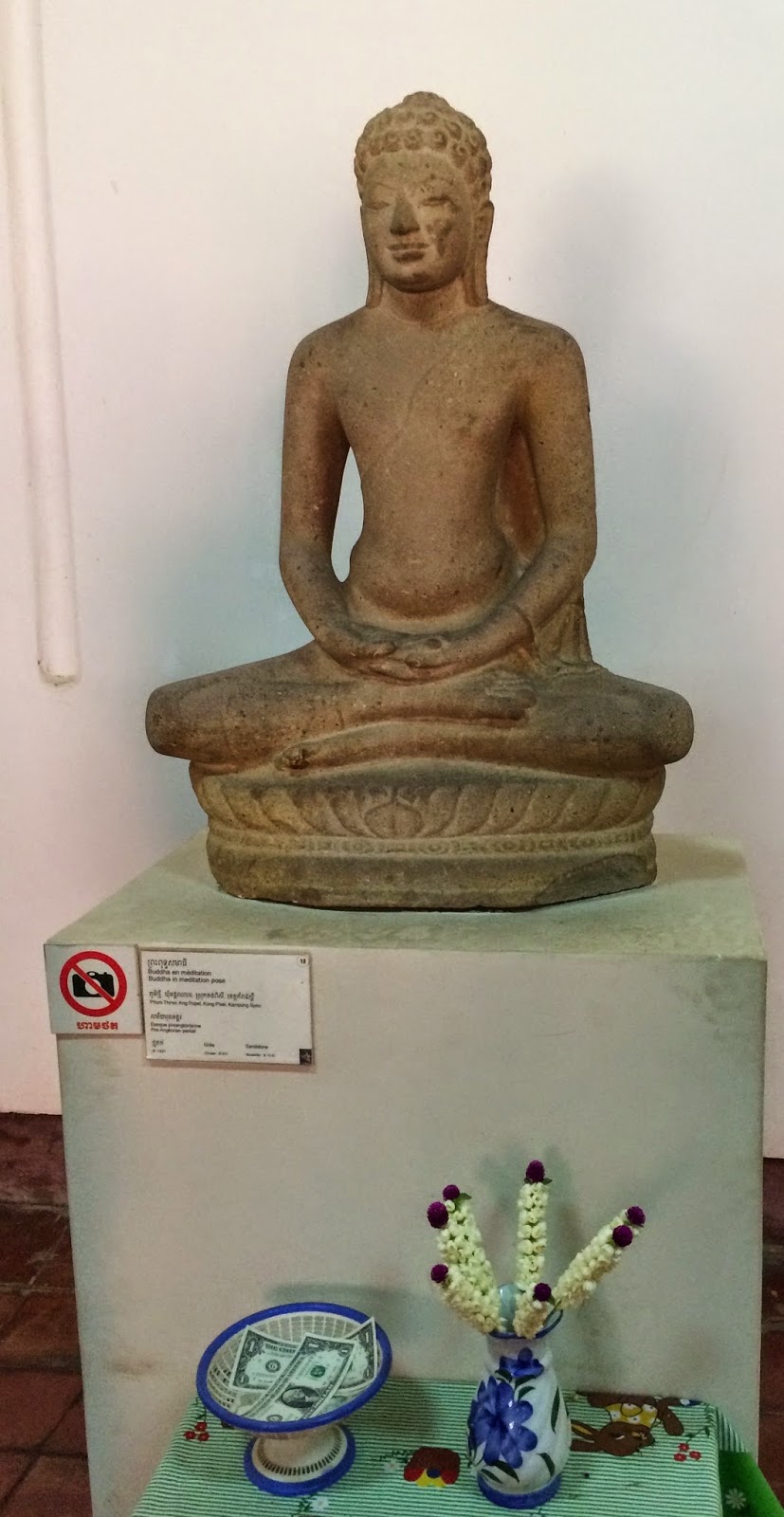 We knew who this was -- he once resided on a bridge near Angkor Wat! 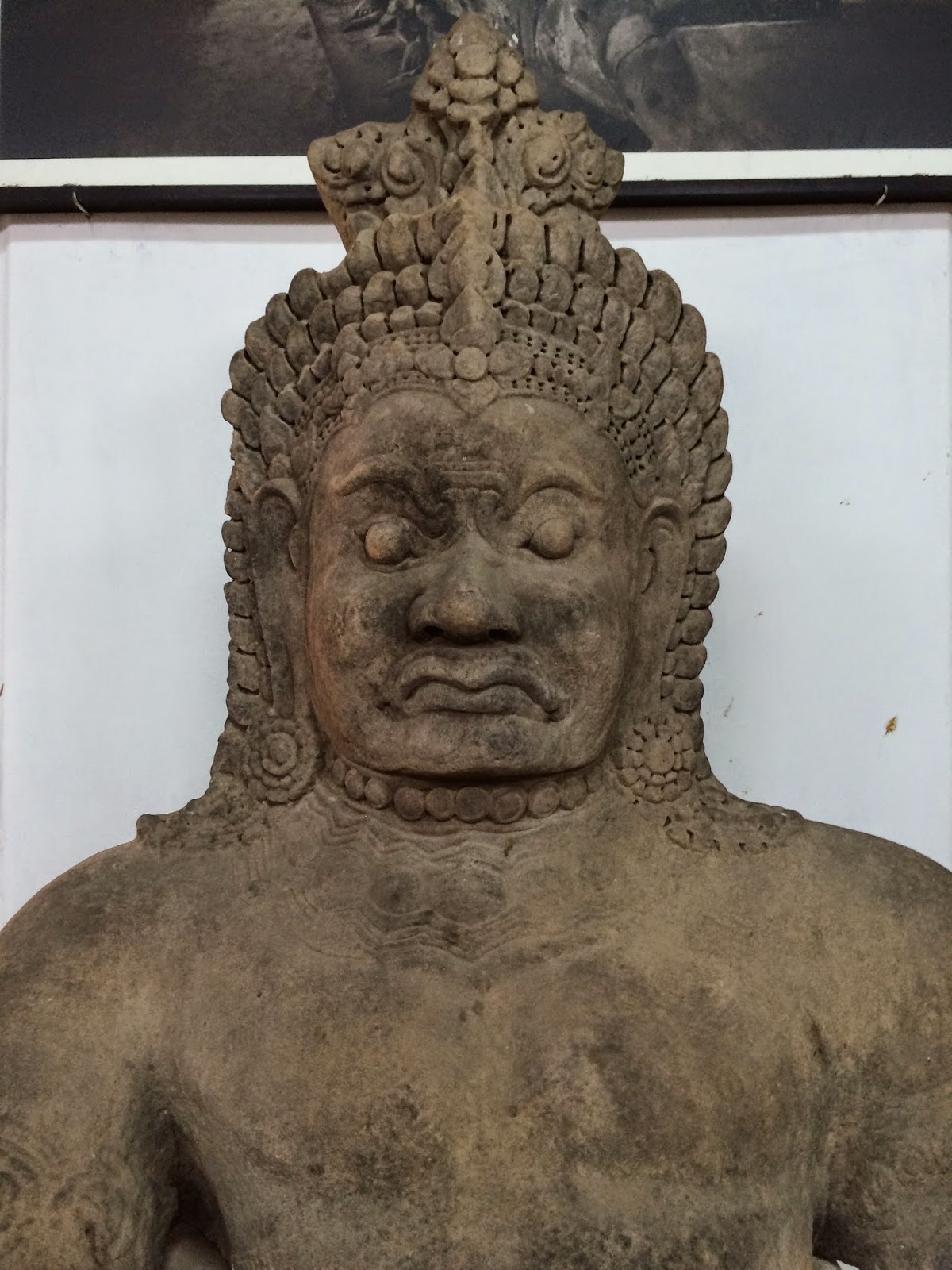 Following the museum, we were taken to a restaurant in town for lunch (maybe to give the crew a break?). It was an absolutely delicious lunch. All the Cambodian food has been quite good; we've had similar dishes on the ship. I haven't posted many food pictures as there have been so many interesting sights to share. Apologies to those readers who live for the food!

In the afternoon we were either dropped off to shop or taken to the ship. We opted to go back to the ship. Dan wanted to walk to find the orphanage from the evening before, but didn't find it. I put up yesterday's blog post and lazed around. Tomorrow we cross the Vietnam border.

Wednesday -- on to Phnom Penh

Tuesday night we again moored along the Tonle Sap River. We will meet up with the Mekong in Phnom Penh. Wednesday morning there was an excursion to a pagoda inland from the river. I decided to give it a pass, as I was pretty tired from the day before. Dan went and reported that I made a wise decision. They traveled by bullock cart about a mile and the pagoda was not in very good shape. There were murals inside but they were deteriorated. I did catch this shot of them preparing to get on the carts (Dan walked back and moved faster). My last bullock cart ride was in Latihar, Bihar (now Jharkhand), India, in December 1969. I don't need to do it again!! 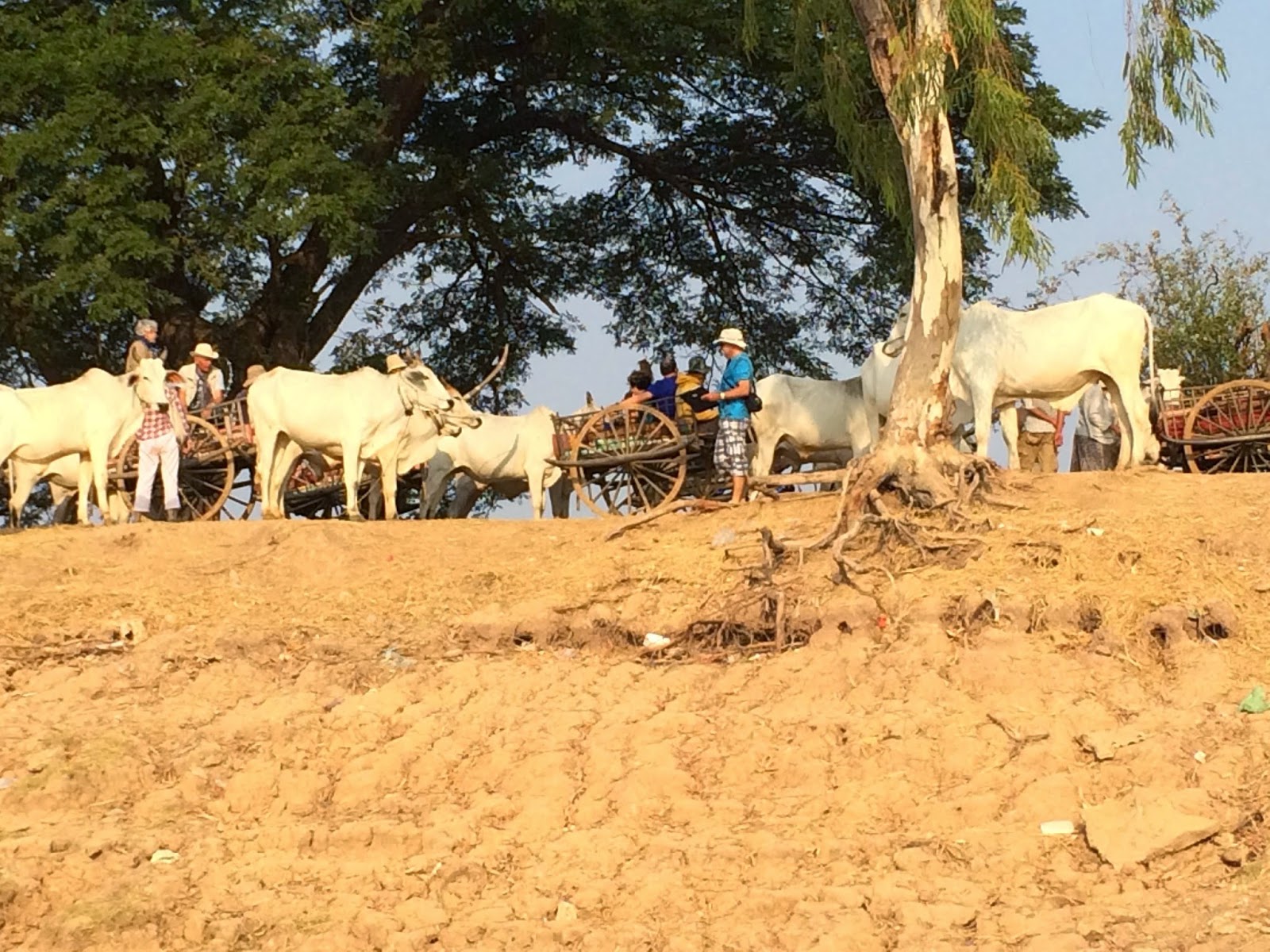 We sailed down the river during lunch and passed a number of much smaller floating villages, as well as many fishing nets and boats. 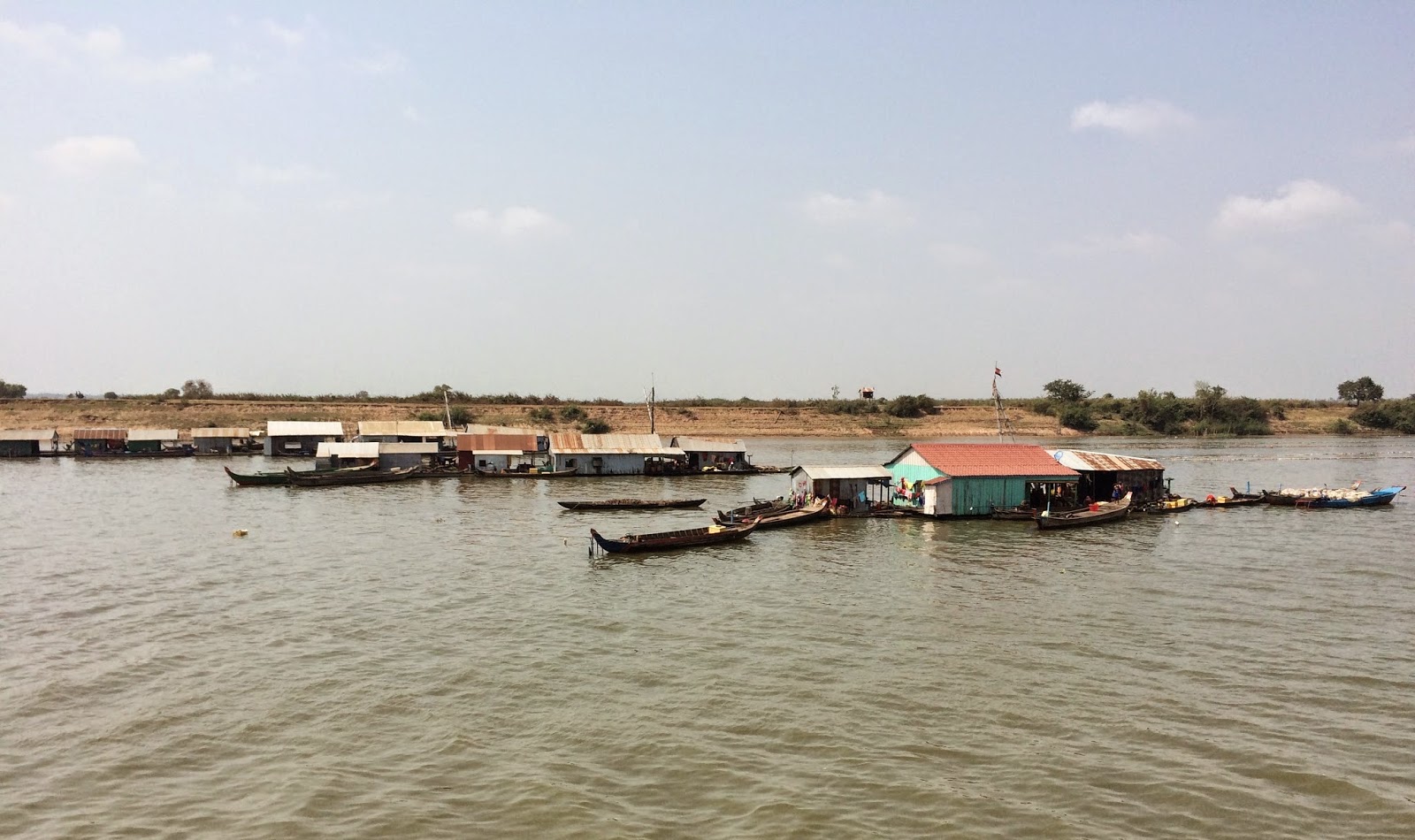 Shortly after arrival in Phnom Penh, we headed out to the Tuol Sleng Genocide Museum, which commemorates the torture and killing that the Khmer Rouge perpetrated between 1975 and 1979. We had a bit of a kerfuffle trying to get loaded into a small bus. It turned out to be two seats too small even after putting down the aisle jump seats. So we all piled out and waited while a larger bus came.

The museum reminded us of our visit to Auschwitz last September. The horrors that went on are quite unbelievable. Very sobering. The building was formerly a high school and was turned into an interrogation center for people who were then sent out of the city to the Killing Fields.

There are only two living survivors of the Khmer Rouge terror. They have both written memoirs and have spots near the exit where they meet visitors and sell their books. 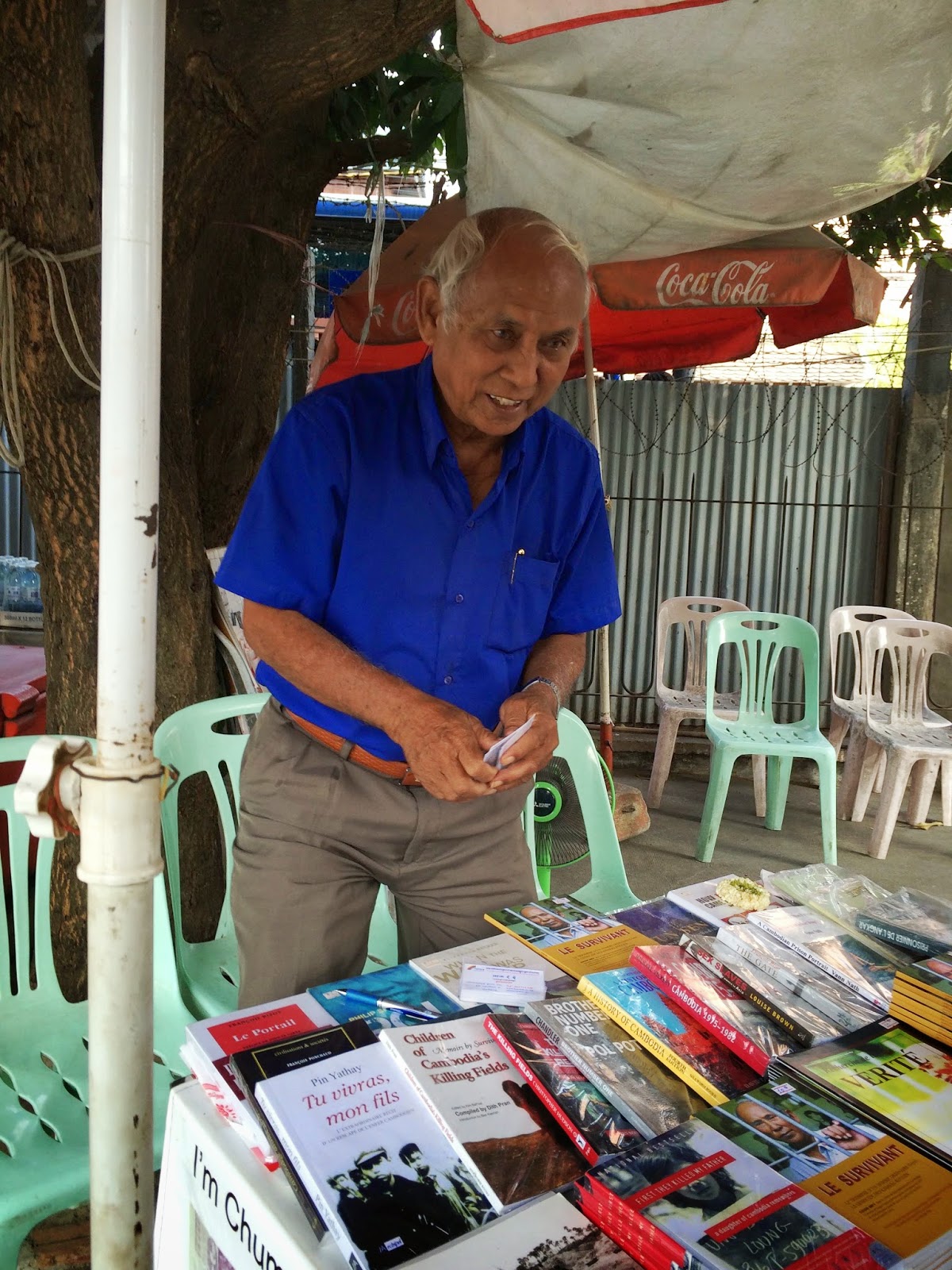 After the museum, we were dropped for an hour or so at the central city market. It was quite disappointing, as it was mainly jewelry, clothing, and manufactured goods, nothing really local except for a few flower shops. 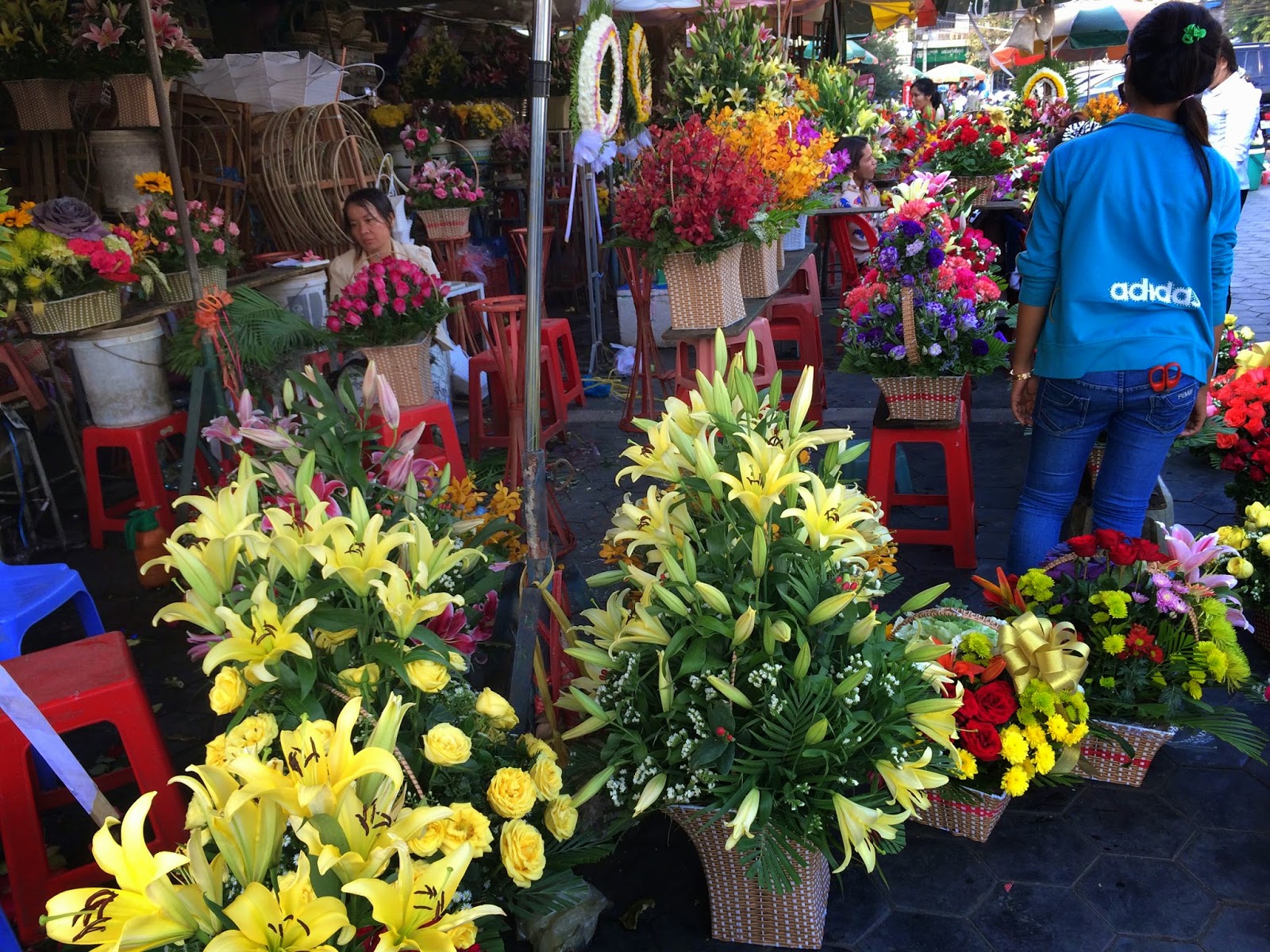 In the evening we were treated to a music and dance show given by some children from a nearby orphanage. They were quite delightful. It was dark and I didn't want to use flash, so these shots aren't great.


Dan went up to speak to the teacher after the show. She is holding the baskets that were used in the fishing dance. I'm sorry it is so grainy. He had these pants and shirt made in Chiang Mai. 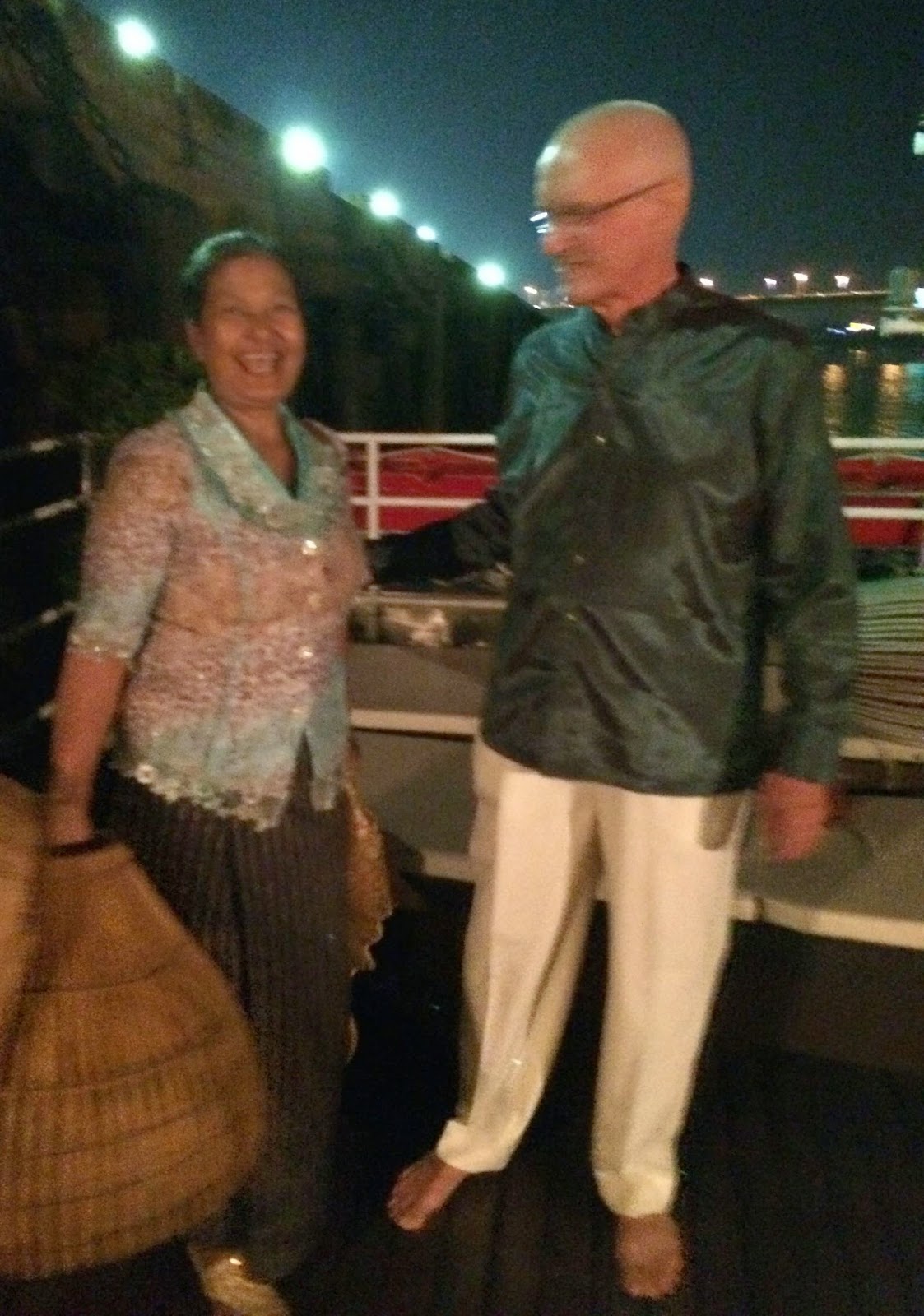 After lunch on the ship, we were taken back to the town dock. This time we were loaded into vans to visit a village that specializes in pottery and palm sugar. As we drove out of the town, we realized how large it is. In the morning we only saw the places very close to the port. There were some beautiful government and cultural buildings along the way.

At the pottery village, a woman demonstrated how they make beautiful perfect pots without a wheel. Basically, the clay is on a stump and she goes around and around, shaping into a pot.


There were some wooden structures around the area for a few of us to sit on while watching. As I sat on the edge watching and taking pictures, I began to feel nauseated. I wondered if I should get up and go away from the area. The next thing I knew I was looking up into Sam's face, lying flat on my back on the dirt floor. I had fainted dead away. Dan said I looked pretty graceful as I went down; another friend said he heard a thump. I wasn't hurt at all, but was definitely dazed for a while. Sam poured water on my forehead and eventually several people helped me up. I sat on a bench and the potter woman was very helpful. She used a rag and brushed me off all around (the ground was very dusty). She got everything off! I kept telling her and the others that I was all right now. A bottle of water was a great help. I think I got overheated. And I'm wondering about the doxycycline we are taking for malaria prevention. When we met up with Jonathan and Mary Kay in Chiang Mai, she had mentioned that the doxycycline gave her digestive upset and she had stopped taking it. I was a bit queasy all night and I've decided to stop the medication. In any case, we haven't seen any mosquitos yet and our co-travelers said they've been in Vietnam and never been bothered there. So I think I'll take my chances. In any case, I am fine now so no worries. I did decline to go on the trip to a temple near here this morning (Wednesday). We arrive in Phnom Penh this afternoon.

After the pottery demonstration and my turn at being the center of attention, we walked across the road to see where the pots are fired. They are blanketed in straw or something similar and it is slowly burned. 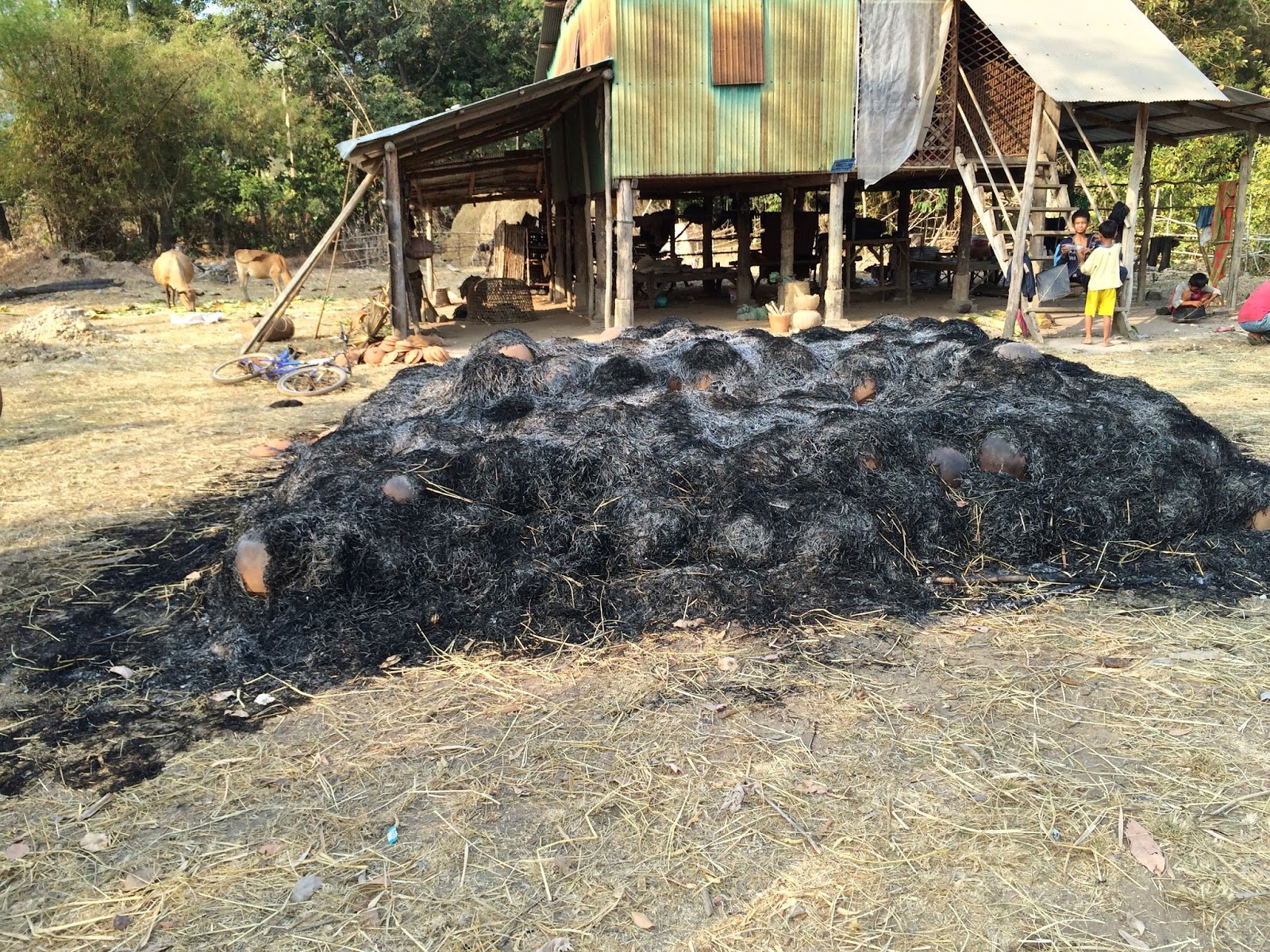 Next stop, still in the same village, was a man who collects palm juice and makes liquor and sugar from it. He gave out samples of both and demonstrated climbing the tree to collect the liquid.

The last stop was the area where they make the clay into liners for cooking stoves. These are very similar to the charcoal chills in India. 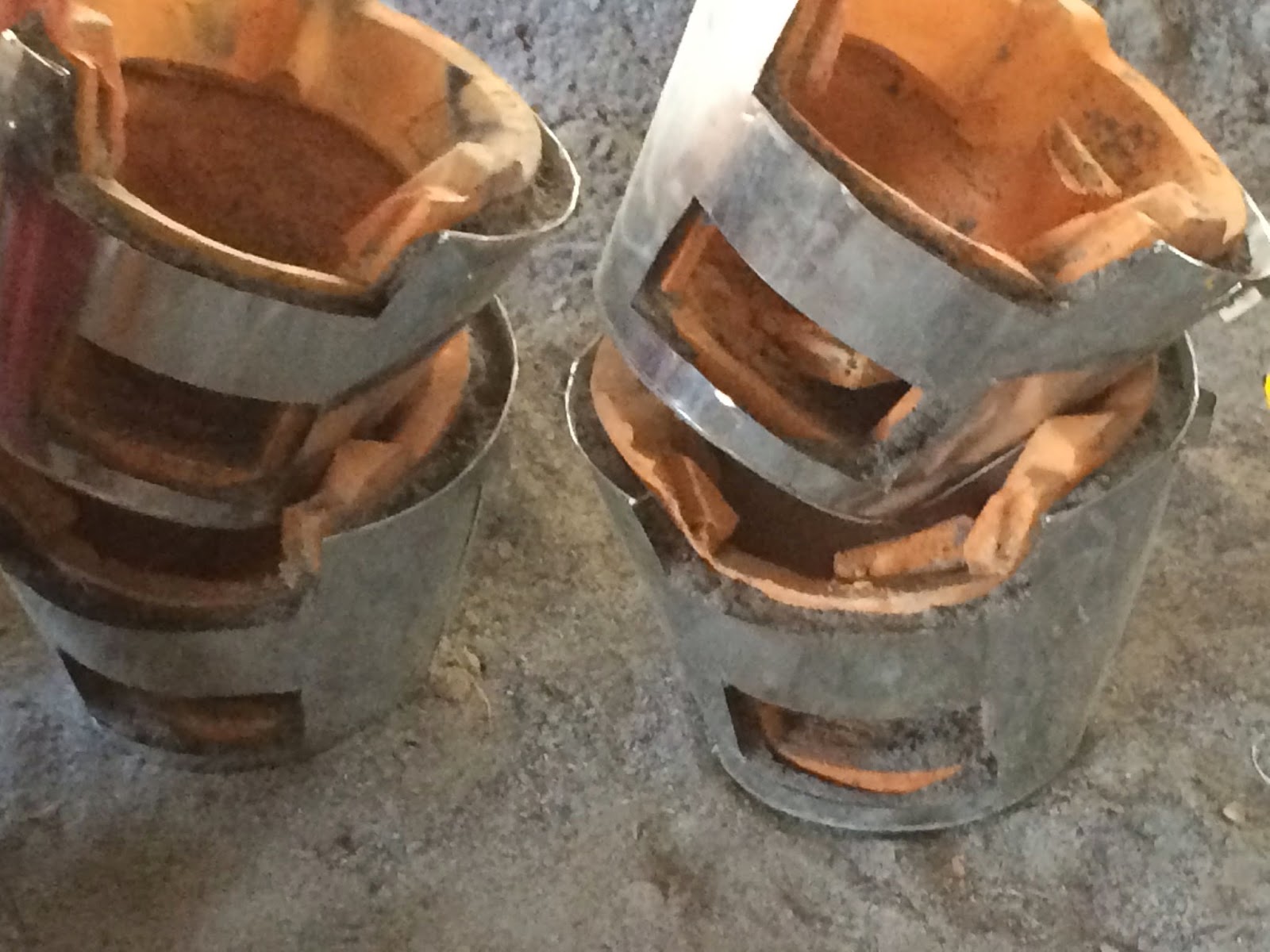 While the group looked around the area, I sat on a bamboo platform. These girls were snacking and laughing together. They were eating something from a pod (a little bit like lima beans, but I'm sure they weren't). 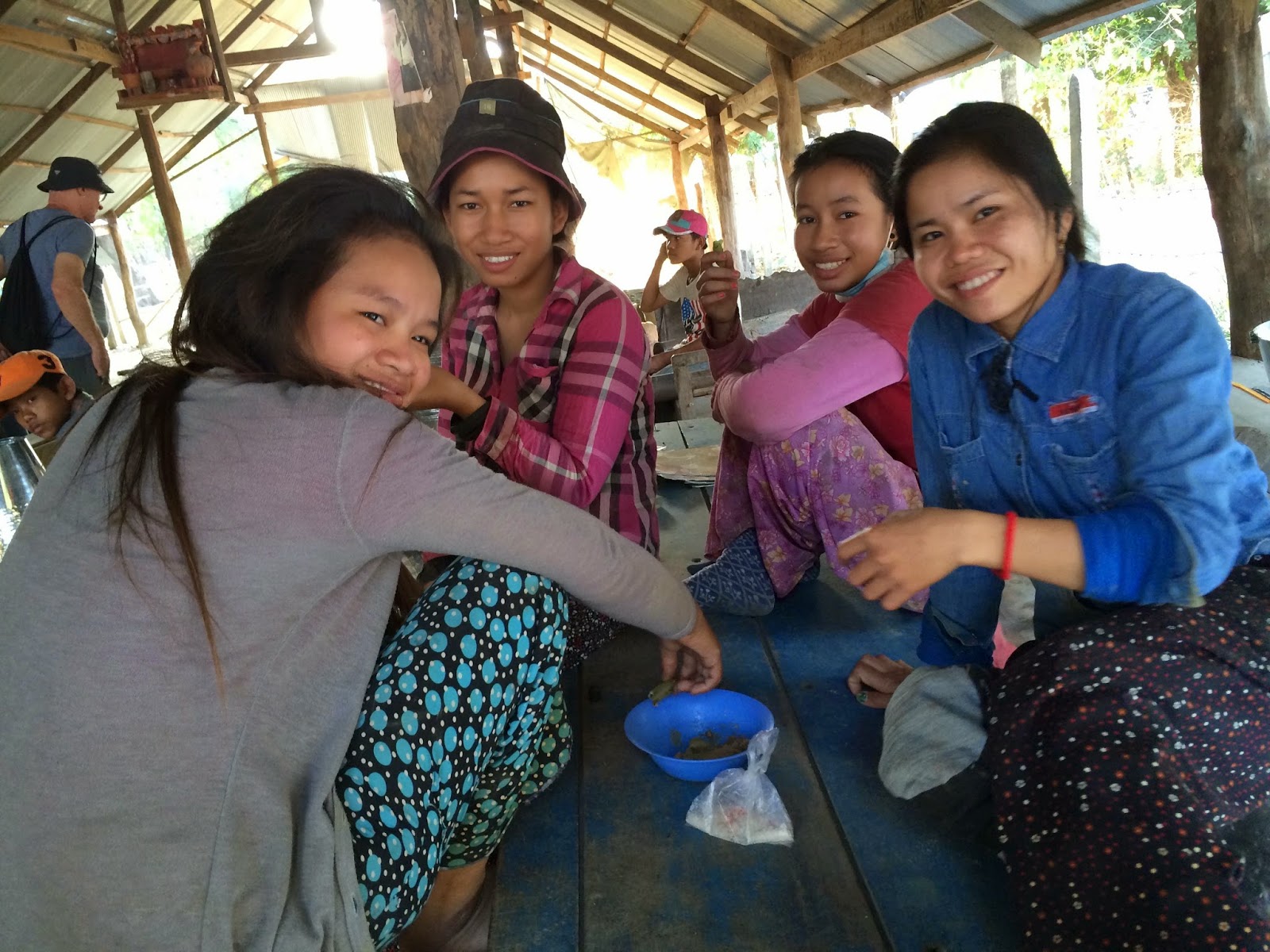