Just a note to those of you who check my site -- I am having problems getting my next blog entry to post; my pictures will not load. I will keep trying and may have more luck over the weekend, as the students leave for the Activity Week adventures for the next week. We had a wonderful visit to the village of Dunda and I'm eager to get those photos and narrative posted.
Posted by Anne Lind at 7:35 AM No comments:

Saturday morning the air was beautifully clear after the rain. I got a good shot of the Doon Valley and the Siwaliks beyond. 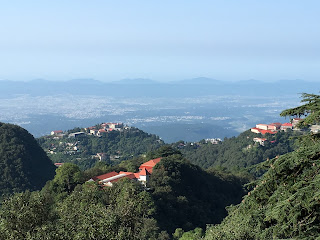 As I walked from the Quad toward the gate, I could see the mist rolling up into the hills. (Old music building on left, now the business and principal's offices.) 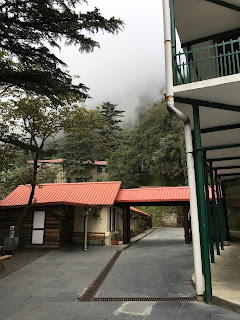 In the early evening, the lowering sun was reflecting onto these clouds as I looked to the east. 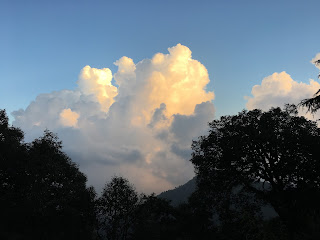 The venerable Lyre Tree, which died from being covered by too much cement for too many years. It is sad, but its iconic shape is still there. 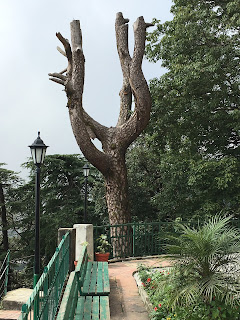 There are lovely pots of flowers all over the main campus. This one is near the gate. 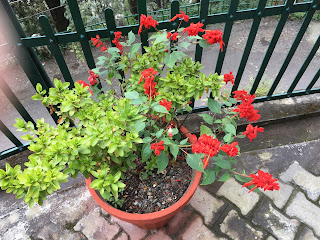 On Saturday I went with a friend to the Mud Hut, a new cafe just above Mullingar. It is in the back of Claremont, which once served as a mission boarding house. It is very nicely decorated and has a small menu of drinks and delicious snacks. I had a non-veg (chicken sausage, I think) savory tart. Fab had a coconut pastry with some chocolate chips and we had an oatmeal/chocolate chip cookie. Upstairs is a small art space. We went because one of Fabi's students was having a show of her art. It was well done and she is a talented young woman. 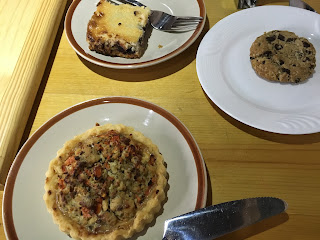 On our way back, we saw a group of Sikh students who were dressed up and carrying instruments. Later we heard that the bazaar was extremely crowded with multiple groups marching, but we never found out what the special occasion was. (Not that it takes much to cause either a celebration in India nor a traffic jam in Mussoorie!) 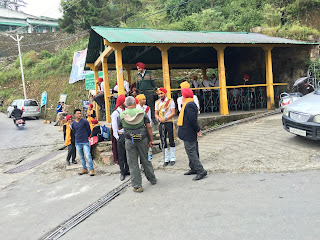 For our Sunday lunch, Dan rode his scooter in to the Delhi Sweet Shop near Picture Palace. He brought back samosas, channa and a bottle of tamarind sauce. We also had dahi (yogurt). 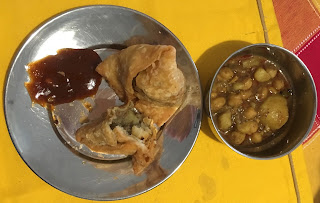 Sunday evening we walked up the hill to visit Darab & Naz and their daughter Vanu. Redwood Cottage, the first home above the school, is undergoing renovation. In fact, it was torn completely down and is being rebuilt as a more modern two-bedroom home. 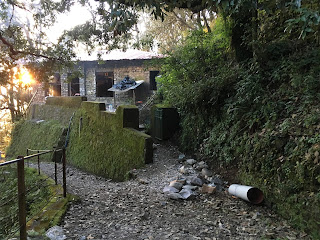 Early in the morning as I was waking, I heard thunder. It is traditional here in the mountains to expect storms on the equinoxes. It has happened almost every time I've been here during one, from 1968 to now. There was a bit of rain in the morning, but not very much. Then in the early afternoon it let loose, with lots of thunder and a heavy downpour. It didn't last too long.

A little girl was playing with a tricycle in the Quad, holding her umbrella over her. 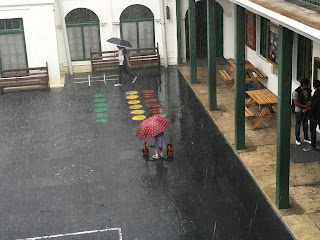 In the late afternoon, I joined a group of crafters. Everyone was knitting. Maria from Indonesia is a beginner; Sue has done some knitting before, and Judy has knit quite a lot. She has been helping the others. I worked on some socks, which I've just learned to do two at a time on one long circular needle. 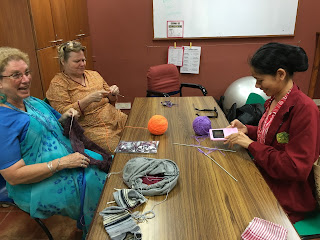 We are back to our simple soup and grilled cheese sandwich supper. We'll be alternating with having dinner in the dining room. The food has improved a lot and there is quite a good variety of choices.

I didn't get any of my pictures loaded in our hotel in Delhi, so I'll start with a few of them. I was able to get an amazing picture of the Chicago skyline as we took off from O'Hare. 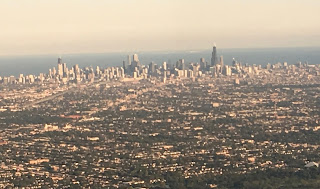 In September the festival of Ganesh is celebrated. I'm not sure of the exact dates, but something was still going on. I heard drums from our hotel room and saw a procession with a statue of Ganesh going by on the street below. 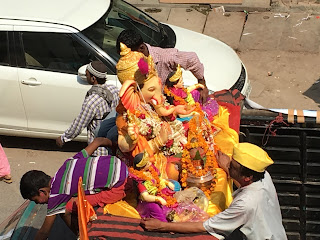 We were only in Delhi one day and it was very hot, so we didn't go out much. Around 3:30 we headed for the Metro to visit Anju and Sandeep. We had a good visit and went to a Noida mall for an early dinner. They recently found a restaurant called Marwari Bhoj. It serves a Rajasthani thali meal, similar to one we had in Meerut some years ago and more recently at Suruchi in Delhi. Sandeep grew up in Rajasthan and enjoys the taste of home. As you can see from the menu board outside, the cost is about $5 per person. 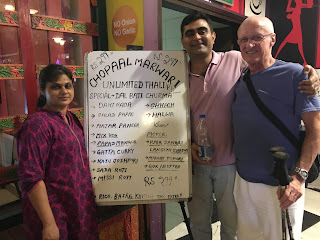 When we arrived, the tables were set and ready for the waiters to fill our dishes. 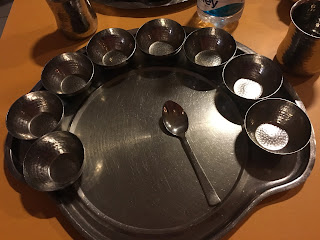 Our dishes were automatically filled with a variety of vegetarian dishes, from salad of cucumbers and carrots to dal and curries. The center of the plate was soon filled with missi roti and chapattis. Near the end of the meal rice was offered to finish off the curries, but I was finished well before that. Each curry was tasty and quite different from the others. 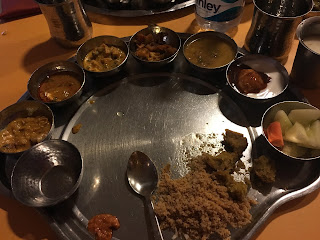 In the morning we left for the train station at 6:00 to catch the Shatabdi to Meerut, just over an hour away. I always enjoy the colorful clothing of the Indian women. 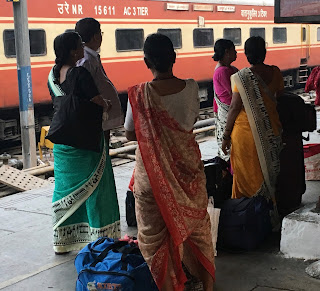 Deepa met us at the train station. Her father, Brij, was waiting in the car for us, which was very unusual. It turned out that he had a viral illness that acted much like chikunga\unya, a mosquito-borne illness (which Sandeep had just recovered from). However, the doctor said this was viral and would pass. During our stay he had a high fever and very painful joints and muscles. We were glad that he seemed better by the time we left.

On the way from the station to their home, we stopped to pick up some fresh jalebis and yogurt for breakfast. 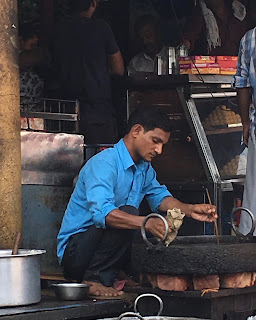 We had a very good visit, in spite of Brij's illness and the high heat. Anju and Sandeep came for the weekend, too, and we had good times and good food (always important!).

Monday morning we took a taxi to the Meerut train station and headed for the hills. For some reason we were stopped on the tracks between Meerut and Muzaffarnagar for an hour; otherwise the trip was fine. Kulwant's taxi driver was waiting for us in Dehra Dun. After some time struggling through the traffic, we hit the Mussoorie Road and headed up. The cooler air was very welcome. Mussoorie was shrouded in monsoon mist, which felt good. We got unpacked and settled into our regular place, Guest Room #1. Tuesday morning I'll start work in the Alumni Affairs Office.

We left home midday on Wednesday to head back to India. This time we flew Air Canada from Chicago via Toronto. The flight landed in Delhi about 10:00 PM Thursday, which is earlier than many arrivals. We breezed through immigration and customs and got a prepaid taxi to our hotel, the Metropolis in Pahar Ganj. They were expecting us and we were in our room and showered by midnight. The A/C felt good; it is hot here in the post-monsoon pre-winter season (upper 90s F).

As usual, Dan went out early to get our morning chai after a fairly decent sleep. It is so sweet it makes your teeth hurt, but it wakes us up! He also brought in some bananas and cookies. Around 8:30 we went out for breakfast at our usual restaurant just around the corner. We both had banana porridge, dalia (cracked wheat cereal) with sliced bananas and honey. Delicious and nutritious! We also had toast, plain white bread with butter and jam. I almost never eat toast at home but for some reason it always tastes delicious here! More chai, of course.

This afternoon we will get together with our friends Anju and Sandeep for an early dinner. Anju is the daughter of our long-time friends the Lals. Early on Saturday we will catch a train for Meerut, where we will spend the weekend with the Lal family. We'll be off the grid while there and should arrive back in Mussoorie on Monday afternoon.

More posts and some photos once we are settled at Woodstock School.
Posted by Anne Lind at 11:53 AM No comments: