Dan and I have long wanted to take a European river cruise, and in June we finally did it. We traveled with the Viking cruise company from Budapest to Passau, Germany. We took the offered pre-cruise days in Budapest and post-cruise in Prague. We had a wonderful time and can highly recommend Viking. Everything was extremely well organized.

Unfortunately, two days before our departure on June 13, I had a sudden onset of muscular back pain. I was able to get some muscle relaxants, which helped, but it was about ten days until I was able to walk without pain (even using my walking sticks). I enjoyed it anyway!

We arrived at the Budapest airport about 5:30 PM after leaving Chicago at 10:45 the night before. Yes, it was a long trip! A Viking representative met us and took us to our hotel, the Hilton Budapest City. It was attached to a very large, modern shopping mall, and we wandered in there to find something to eat, then happily fell into bed.

One of the things I had read about Budapest mentioned the many thermal baths. I had gone online and gotten a ticket for the Szechenyi Baths, which were not far from our hotel. Dan was not interested, but went with me by taxi to check it out. He wandered around and walked back to the hotel. My ticket included access to a small private changing room where I could leave my things. They gave me a wrist bracelet that was waterproof and acted as a key to the room. (Small means just large enough to stand or sit on the bench and change.) I thoroughly enjoyed several hours exploring and soaking in the various pools. There were two large outdoor pools, one cool for swimming laps and one warm to enjoy. In the large building, there were 15 pools of varying temperatures and I tried them all. After making the rounds, I had a sandwich for lunch and went back to try them all again. The warm water felt great on my back. When I was finished, I took a taxi back to the hotel.


On Sunday, we were taken from the hotel to the ship by bus along with others who had come in early. The ship was much different than the larger ocean cruise ships we have been on. There were 188 passengers. The food was excellent. All three meals were served in the dining room, with optional buffets in the upstairs lounge area. We usually had lunch upstairs, breakfast and dinner in the main dining room. It was open seating, but we ended up eating with some of the same people multiple times. It was interesting to get to know some of the other passengers -- American, British, Australian, Canadian were the majority, with a few from India and Jamaica.

Monday morning we had a bus and walking tour of some of the main sights of Budapest (actually Buda and Pest, on opposite sides of the river). I didn't take many photos, as I was very dependent on my walking sticks. In the afternoon I had the great pleasure of meeting up with a former co-worker and friend who has been living in Vác, about 20 minutes away from the city, for the past 15 years or so. Lea and I sat together on a bench in the shade outside the ship and talked nonstop for a couple of hours. What a treat! 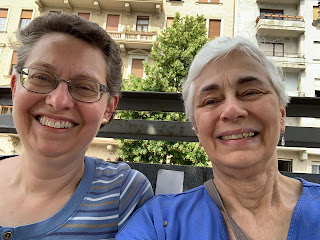 The ship sailed after dinner that evening, heading toward Bratislava, the capital of Slovakia. The scenery along the river was beautiful and we enjoyed watching our progress through a large lock. Our tour of Bratislava was in the afternoon, again a combination bus-walking tour. As we drove into the small Carpathian mountains above the city we had a good view of the famous castle, called "The Table," because it looks like an upside-down table. 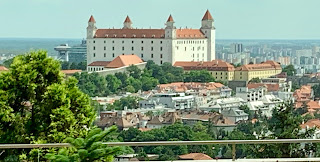 Our next stop was Vienna. Again we had a walking tour in the central part of the city. I enjoyed a rest stop at a coffee shop recommended by our guide.

That evening, I signed up for a Mozart and Strauss concert back in the city. There were quite a few from our ship in attendance, plus many more. It was a fairly small venue in an old building. The "orchestra" consisted of a violin, viola, cello, bass, flute and piano. They were all excellent musicians. There were also two singers, a soprano and a baritone, and two dancers, male and female. The singers and dancers did several numbers each throughout the evening. I ended up in a seat in the front row center, and almost felt kicked by the dancers! There were no photos allowed, but I got one of the stage before they started. You can see how small it was. The violinist was the leader of the group and stood at the front to the left. She was outstanding. 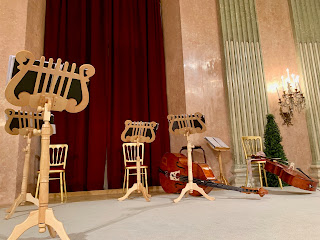 The following day we were in Krems, Austria. This small town is the home of Gottweig Abbey, which we toured. It sits on a hilltop above the town and is a beautiful location. There was much to see in the very large monastery.

During the afternoon we sailed through the scenic Wachau Valley, which was beautiful.

The next day we stopped at Linz, Austria. We saw the home where Mozart stayed as he composed Symphony No. 36, "Linz", and other places in the small city. The Brucknerhaus, a concert hall, was very close to our ship.

Our last stop was the town of Passau, Germany. This was a much smaller city than the earlier ones, so we saw much of the main downtown area.

Part of our tour included tickets to the daily organ concert in the giant Baroque St. Stephen's Cathedral. The church was filled. The main organ (there were five altogether) was in the rear, and we were facing forward. The cathedral was very ornate and the music was very good. After that we headed back down the hill to the bus to go back to the ship. That evening a young woman gave us a presentation on the history of the Danube River, which was fascinating.

The next morning we had to say goodbye to the ship and board our bus to Prague. The drive was very scenic, through hills and fields of southern Germany and into the Czech Republic. Our hotel, the Corinthia, was some distance from downtown, but there was frequent shuttle service. That first afternoon we wandered into Vyšehrad, a 10th-century fort that has a large park. We only made it into the edge of the park, but it was a lovely walk. We stopped at a food stand to have some drinks and met some others from our ship -- English people who were having fish and chips for lunch! Our hotel had a swimming pool on the 26th floor, and I was happy to visit it twice during our stay.

Our "Panoramic Prague" tour ended up being about four hours of walking. The bus took us to the downtown area and we walked through a park along the river, across the famous Charles Bridge, and into the heart of the city, the large square. We saw the famous Astronomical Clock, which has mechanical figures moving each time it strikes the hour. The area in front of the clock was totally jammed with people; there must have been thousands of tourists that day. 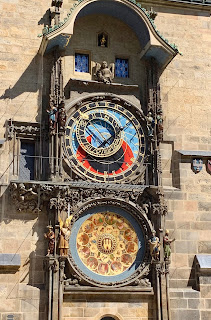 After a rest back at the hotel in the afternoon, we headed out for the Folklore Dinner. Two busloads of Viking passengers arrived at the small village just outside the city, where we had a traditional Czech meal and were entertained by musicians and dancers. The trio consisted of a violin, hammered dulcimer, and string bass. They were excellent and played lots of Czech folk tunes as well as some classical numbers. Two dancers performed multiple times and the mistress of ceremonies sang as well. At one point a number of audience members were persuaded to join the dancing. The meal was good; although there was a lot of food, it wasn't too much.

On our last day, Dan and I took the hotel shuttle bus back to the downtown area. It let us off right at the main square. We again crossed the Charles Bridge, hoping to find the Kafka Museum. I was on a mission from a friend to find some Kafka memorabilia. We had not been able to visit a place where he lived in the castle complex the day before, so we thought the museum shop might do as a substitute. We did indeed find what we were looking for! It was a very hot day, and after trying a local delicacy, the Trdelnik, I headed back to the hotel.


Our flights home were from Prague to Munich to O'Hare. We put our bags outside our room at 10:00 AM and went down to meet our transportation. Five of us were leaving at the same time, so it was a small van. Again, we were so impressed with the Viking organization. There were at least five or six groups at our hotel from various cruises, some post-cruise like us, others getting ready to start. Everything worked like clockwork and we felt well taken care of.

I'll leave you with a view of one of the buildings on the main square in the center of Prague. 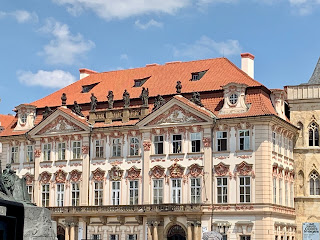