The starting point of this trip to Hawaii was a celebration for Tracy's 50th birthday. And what better way to celebrate than a helicopter ride over the volcanoes. The experience was dazzling!

As we took off, the shadow of the helicopter was very clear on the ground. We saw our shadow frequently throughout the ride, as the sun was out most of the time. 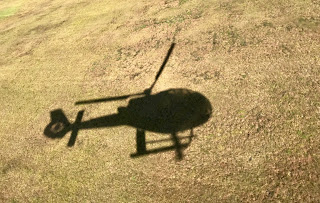 Soon after leaving the airport, we flew over large macadamia farms. The fields of trees are surrounded by tall firs to break the trade winds and protect the nut trees. (We saw a similar thing in New Zealand on the kiwi farms.) 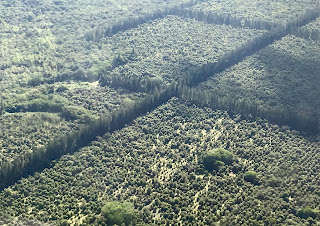 We flew down to the coast, not too far from where we had driven the day before. The blue of the water is striking against the cliffs. 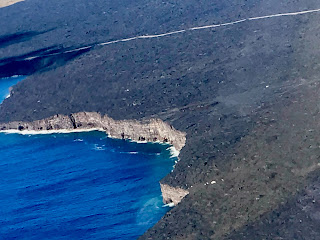 Our pilot flew back and forth across the dark lava looking for a breakout. The spots change daily, even hourly, so he never knows for sure where one might be. We really lucked out, finding this small crater with three flows of lava. We could actually see it move. He circled the crater in both directions so everyone could see well. 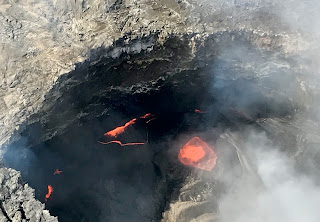 Some distance away we could see Mauna Kea poking above the clouds. There are a number of international telescopes at the summit. 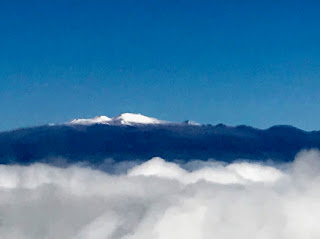 After leaving the lava fields, we flew over an area with multiple waterfalls. Beautiful! 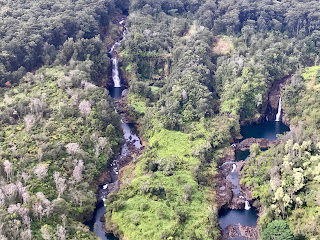 Here is Dan, just off the helicopter. We had life vests in a small pack around our waists. Fortunately, we didn't need them! 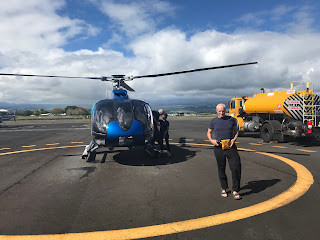 We had a lunch reservation at the Hilo Bay Cafe, but got there quite early. Some walked around the nearby Japanese garden; I found a bench (slightly wet!) and watched the bay and the people. 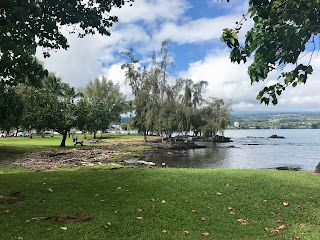 The restaurant was fabulous. Here is the birthday girl enjoying her drink. 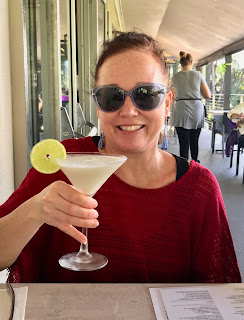 After lunch we stopped for a bit of shopping and eventually headed home. What a great day!

On Thursday we drove to the Volcanoes National Park and along the Chain of Craters Road. The scenery was stunning. The visitors' center was jam-packed with tourists, as was the parking lot for the lava tubes. We thought we'd do the tubes on the way back, but there were even more cars and people waiting, so we passed it up. Dan and I had gone through them on our 2008 trip here.

Unfortunately, I was not feeling well all day so I don't have many pictures. I got out of the car to see the views about half the time. By the end of the day, my medical family helped out (thanks to Tracy and Andrew) and we stopped at a pharmacy to get me some more meds. The hope is I'll feel much better very soon.

We stopped for lunch at a camping area with picnic tables (we had gotten sandwiches at a cafe on the way into the park). It was pleasant, not too hot. I was thrilled to see some nene nearby. The nene is a Hawaiian goose. It can't fly and is endangered. There were signs all along the road warning us not to run over any. This couple had a young gosling with them, a good sign. 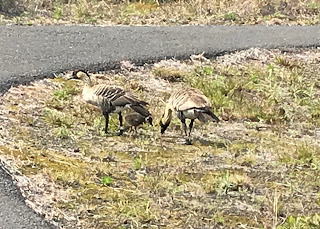 As we came to the end of the road, we had a great view of the ocean. The sky was overcast in a way that made it impossible to see where the water ended and the sky began. 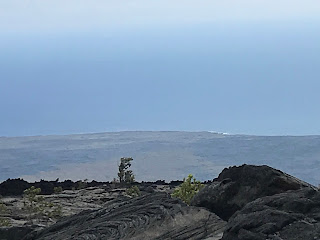 The road descended to sea level, where we were able to see several arches the water has carved into the lava cliffs. 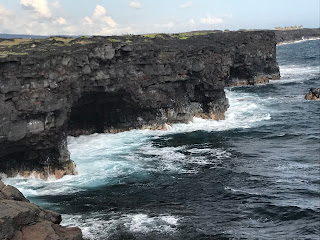 
If you are a long-time reader of my blog, you know that I like observing trees in different settings. I enjoy the various shapes. I've already seen a lot of wonderful ones here. A few are in the town of Hilo, others at the beach or during the drive. 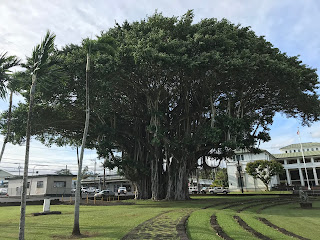 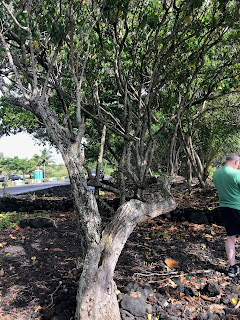 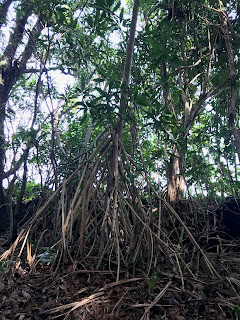 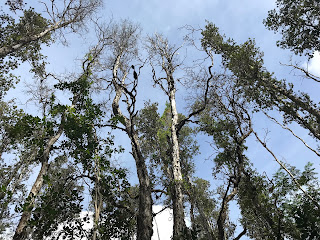 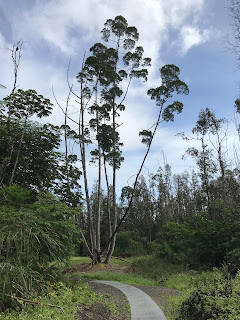 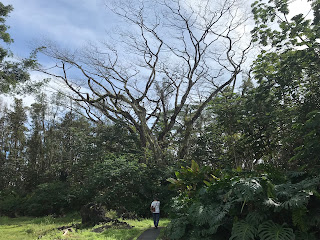 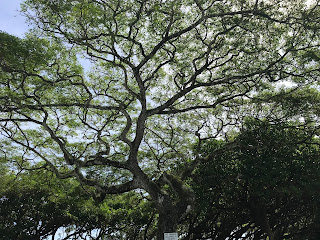 Tuesday evening we settled into our rental home for the week. It is a beautiful house in a residential area south of Hilo. The lots are very large; we can barely see the house next door, where the owners live. We have three bedrooms and a large living area/kitchen. There is also a nice big lanai with plenty of seating space and awnings for shade. We went into town for dinner at a Thai restaurant and headed to bed quite early, as everyone was somewhat jet-lagged.

For breakfast on Wednesday we had bagels that Anjali had gotten. And fruit! Fresh fruit from the trees on the property -- papaya, oranges, bananas. Later in the day one of the owners brought me some pomelos (similar to grapefruit). I spent nearly a half hour peeling and removing the membranes, but it was worth it. (We like having them in Thailand, where we buy them already peeled and sectioned.)

In the morning we drove to a nearby state park, Lava Tree Park. It had a circular path so we could see the incredible vegetation and stumps of lava trees -- lava shapes that took over the trees when it flowed. One area was fenced off because of a deep rift (below). 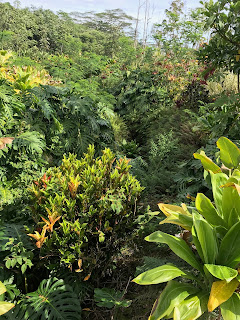 Here is Dirk in front of some of the lava trees. 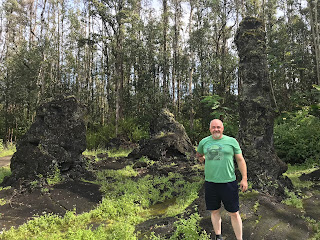 From the park, we drove to two beaches. The lava beaches are amazing but treacherous. As we approached, I got this great shot of Anjali taking a picture with Dirk taking one nearer to the beach. 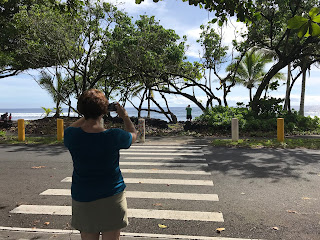 Here's one of the beaches. The second one had a pool fed by hot springs with a small opening to the ocean. It looked like a great places for families. Maybe we'll get back and I can swim there. 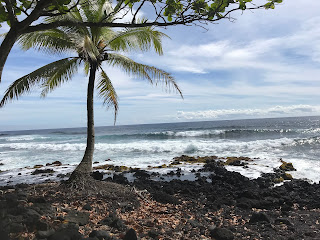 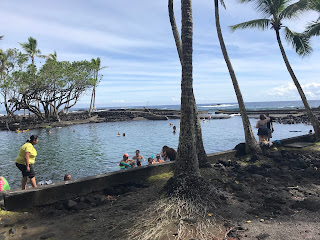 In the afternoon, the other four left for a hike into the lava fields. Dan and I didn't go, so we had a nice quiet afternoon and evening loafing around the house.

I must have one shot of the ubiquitous gecko.

It took more than 24 hours, but we did manage to leave winter behind for a while. On Sunday morning the 24th we left home to drive to Michigan City, where we leave our car and catch a bus to O'Hare. The weather report said snow would be starting about the time we were planning to get on the bus, and indeed it was snowing by the time we got there and parked. The 8:20 bus was cancelled; there were several others waiting and a load of people were brought from South Bend. We did catch the 9:20 bus and the driver was excellent. It snowed all the way to the airport. Our flight was delayed, but not by much. When we got to Seattle it was nearly 6:00 PM, dark and snowy. They don't get much snow in Seattle, but they did have a white Christmas this year. We had planned to spend the evening visiting with a friend, but after talking with her we realized none of us were going to out on the slippery roads. The restaurant attached to our hotel was closed, so we tromped through the snow (in our sandals!) to the next hotel on the street and had a nice dinner.

In the morning the hotel shuttle took us to the airport. Our flight was delayed (no surprise). It took a good hour to deice the wings, which were covered with about an inch of snow. We flew to Maui and had about 20 minutes to transfer to our plane to Hilo. We were really glad that our luggage made the transfer, too!

We took a taxi to our hotel, the Wild Ginger Inn and Hostel. It was a bit funky, but served well. There were no restaurants or groceries open (after all, it was Christmas afternoon). The very kind woman at the front desk offered us a plate of leftovers from the Christmas lunch they had served. She showed up at our room with two enormous plates of ham, beef stew, and a Filipino noodle dish.

Tuesday morning we had a nice continental breakfast then waited around until Anjali and Domingos arrived. They had spent two nights on the Kailua-Kona side of the island, then came to Hilo and picked up our rental minivan. We went to lunch at a good fish and chips place, then went to the Pacific Tsunami Museum. We learned a lot about tsunamis, and why Hilo is particularly vulnerable to them.

After a stop at a coffee shop, we went to the airport to pick up Dirk and Tracy. Our rental house is in the countryside near Pahoa, about 45 minutes south of Hilo. It is beautiful, three bedrooms and a lovely large lanai. Below is the sunrise this morning, taken from our bedroom. 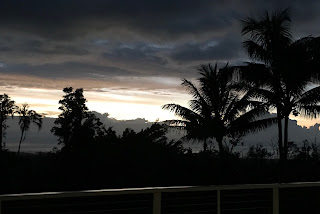