2018 has been an unusual year for us, including the fact that we spent our Christmas in Las Vegas. Our daughter and her husband had plans to go there for some time and they urged us to join them when our other travel plans didn't work out. We had a wonderful time, even if it was quite exhausting.

We arrived on Sunday afternoon. Anjali had arranged a downtown Las Vegas food tour for us, which helped us get through the early evening hours when we would have liked to sleep!

The food was good, although most of it not especially inspiring. The tour began at the Container Park, a really cool collection of shops and restaurants all made out of shipping containers. Outside the entrance was a giant sculpted praying mantis. At about 5:00 the show began -- fire shot out of the antennae with loud booms. The kids around loved it! 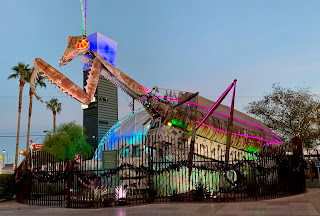 I had heard about the Fremont Street Experience and thought it was something I'd like to see. It was interesting, but there was too much extremely loud music for me to ever go back! One of our stops was at a casino whose owner was a collector. On display was the largest gold nugget ever found. It was found in Australia; he paid about a million dollars for it and it is now valued at something like 22 million. 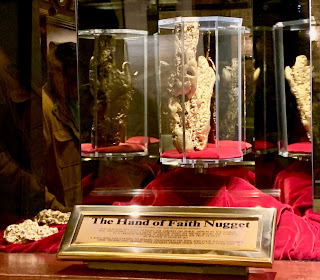 Another artifact was a huge piece of the Berlin wall. It is installed (under plexiglass) in a men's restroom behind three urinals. 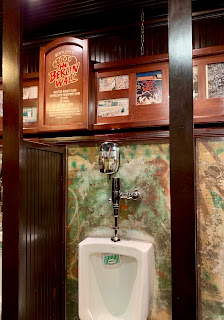 We stayed at the Bellagio, a lovely Italian-themed hotel on the Strip. It is famous for its dancing fountains and a large Conservatory. For the holidays, the Conservatory had a fabulous display. The first photo shows the centerpiece and the second a corner area with playful polar bears. 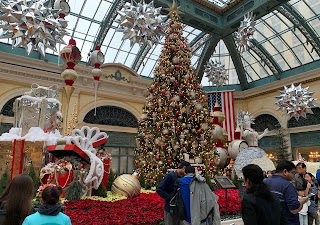 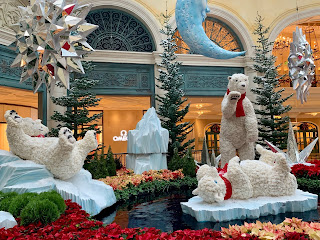 Our room faced away from the Strip toward the mountains, which gave a lovely sunset view.

The lobby ceiling was covered with Chihuly glass flowers. (This is an unusual picture, because most of the time there were crowds of people everywhere.) 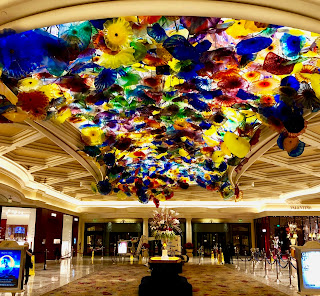 On Christmas Eve afternoon, Dan went with Anjali and Domingos on a helicopter tour into the Grand Canyon. I had done it some years ago with one of my sisters, so didn't participate this time. While they were away, I had lunch at the Patisserie -- a sandwich and key lime tart. Delicious! 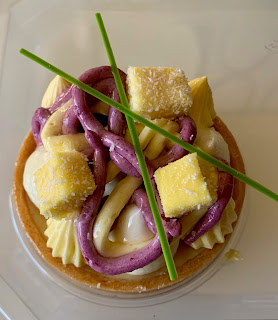 Of course, we had lots of wonderful food. On Christmas day we had an early dinner at FIX, an in-house restaurant near the theater where we saw the Cirque du Soleil "O" show. They had a prix fixe pre-theater special.


On our final morning with Anjali and Domingos, we had breakfast at one of the in-house restaurants. The oatmeal was quite amazing! (and quite too much for me!) 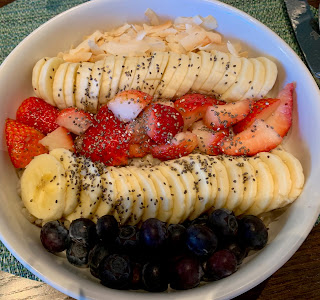