We had a good time in Bath and were happy to have the second day there. I didn't say anything about our B&B, but we were very happy with the location, a quiet residential area within walking distance of downtown. The street we were on was a very large oblong circle with semi-detached (US: duplexes) homes all along and a playing field in part of the center. The home we were in rents out two bedrooms. We were in a room on the top floor (UK: 2nd, US: 3rd) that had a very nice small bathroom built under the eaves. This isn't the house, but it shows the neighborhood. Sorry it's a bit dark, I took this on the way back from supper. 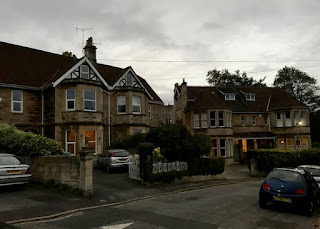 I forgot to include this photo yesterday. As we were walking toward the bus station after meeting up in the afternoon, we passed this fiddle player who was performing on a rope. Pretty amazing! 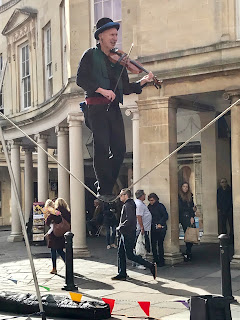 The drive from Bath to Carmarthen, Wales, wasn't too long and was mostly on major highways. Our first stop, just north of the bridge across the Severn River, was Tintern Abbey, a ruin from about the 13th century. It must have been a fairly major installation at the time, as the grounds are very large. This first photo is the approach from the visitors' centre. The stones in the foreground form part of the walls of some of the outbuildings. 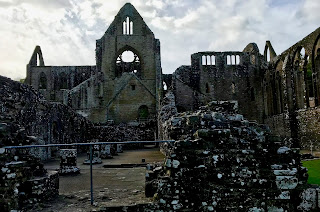 One of the doorways into the abbey. 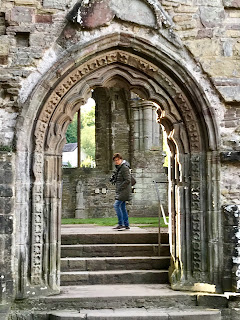 Inside the church, the roof is long gone, but the basic structure is still there. This is looking back toward the entry from the transept. You can see there weren't very many people visiting. 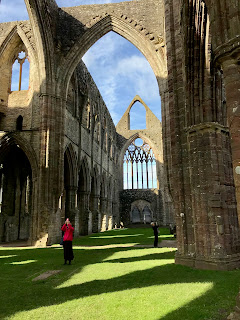 The main cloister with windows to the outside. 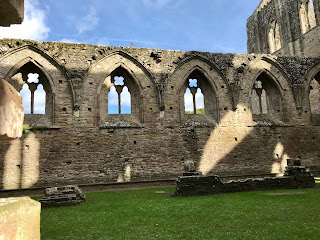 The front of the church from the outside. 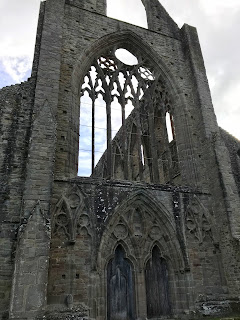 We roamed around the extensive outbuildings, including kitchen, infirmary, abbott's quarters, book rooms, and more. 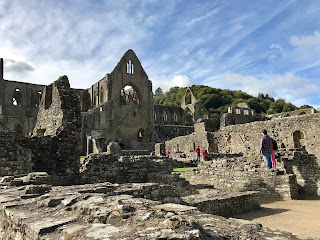 We arrived in Carmarthen around 2:00 and found our small pub/hotel easily. However, the car park is in the rear and that took some figuring. Basically we had to go around a very large, long block and finally got there. We walked out along the street (we are right in the middle of town) and had a late lunch at the Rose & Crown. Dan had fish and chips (sweet potato fries and mushy peas with mint) and I had a brie and cranberry panini. It was all delicious, and will probably do for supper, too. 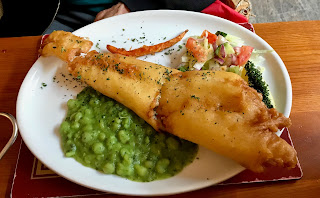 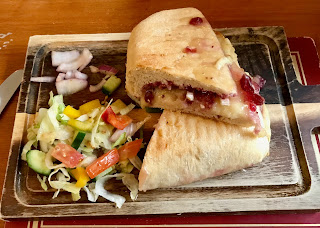 Tomorrow we head north into Snowdonia National Park and the special mountaineering hotel I've been looking forward to.