We left Dover Wednesday morning and headed west along the coast. Our first stop was the small town of Battle, on the site of the Battle of Hastings in 1066. It was interesting to learn more about the history that we were supposedly taught. I knew enough to remember the year and that the Normans defeated the Anglo-Saxons, but not much more. Look it up on Wikipedia if you are interested in more details!

An abbey was built at the battle site to commemorate the victory and the picture below shows the gatehouse from inside the grounds. There is an active school in one of the main buildings, and that area was off-limits to visitors. The visitors' centre had very good displays and a film. Much of the display was oriented to kids, and there were plenty of them around (half-term holidays). We seem to have met up with lots of school holidays -- two weeks off in Scotland, most of the time we were there. 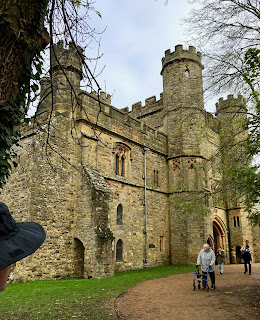 Up in the tower of the gatehouse building there were more displays. I liked this carved-out seat at the window; there were a number of these. 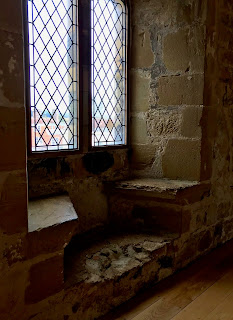 A narrow circular staircase took us to the top of the tower. (I was grateful that there were two, one going up and the other down; two-way traffic would have been impossible.) This view is looking toward the school on the left and the battlefield area beyond. 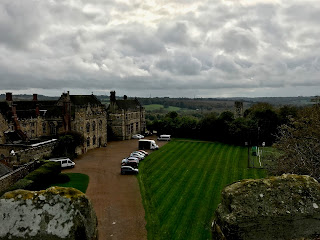 Looking the other direction toward the countryside. 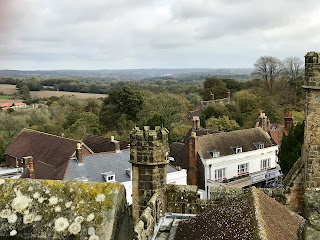 We drove on, heading to Portsmouth. We passed the Arundel Castle, which looks magnificent, but didn't stop. I just snapped this from the car. 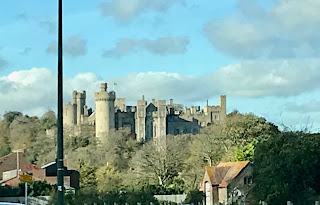 Our hotel, the Queens Hotel, was right on the seaport in Portsmouth. I had heard of this hotel before and wanted to stay there. It did not disappoint. This was the view through our slightly misty window. There was a huge park or esplanade along the shore. 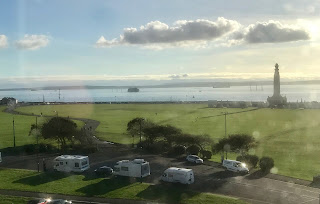 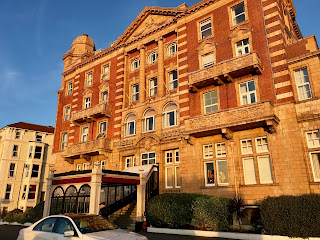 We walked a short way and found a wonderful Turkish restaurant. We shared a plate of maze, hummus and yogurt concoctions served with warm pita bread. 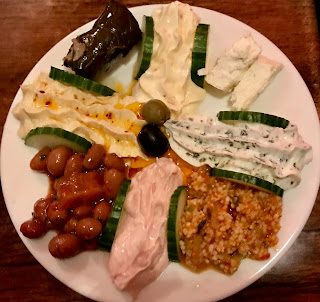 I had a nice red lentil soup, which suited me. Dan tried a dish in the menu area "Yogurtlu" called Iskender Lamb. It was tender pieces of lamb layered on bread with sauce and topped with fresh yogurt. It was absolutely delicious (I had to try it). 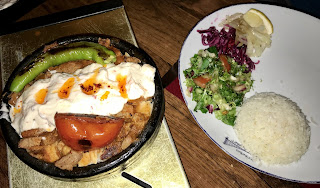 Thursday morning we headed to Southampton, where we dropped our rental car at the airport. We took a train into the central city and taxi to our Air BnB. Our taxi driver was a friendly Sikh with family roots in Lahore. Our Air BnB is in a penthouse in a converted warehouse right near the docks. We can see the cruise ship ports from our window. We walked downtown for lunch. This picture shows part of the old city walls right next to a super-modern enormous shopping mall. 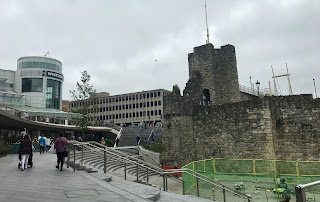 We might be able to walk to the ship on Saturday morning, although a taxi will probably be a better idea. For the next two weeks we will have limited internet connectivity. I have one more blog post to publish. Thanks for reading along!