As I mentioned in the last post, we toured the royal yacht Britannia after we left the castle. It was interesting to see how the royal family lived on vacation when they had the yacht. It was decommissioned in the late1990s and is now only used for occasional ceremonies.

After touring the yacht, we had some tea overlooking the yacht. Then it was back on the bus to head to Holyrood Palace, the residence of the queen when she is in Edinburgh. It's also where Mary Queen of Scots lived and is full of Scottish history. No photographs were permitted inside.

As we exited the palace, we came into the ruins of the abbey that was originally on this site. The walls are quite well preserved and it was stunning. 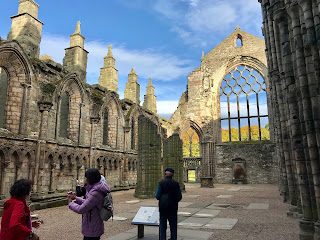 We walked around the gardens, where the queen's annual garden party is held. It is spacious, but with 8000 guests it might feel a bit crowded. This delightful statue was in among the greenery. 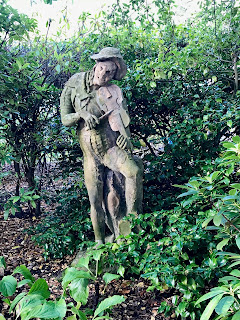 This stairway comes out of the place right where it meets the old abbey. It is where the queen enters to greet her garden party guests. 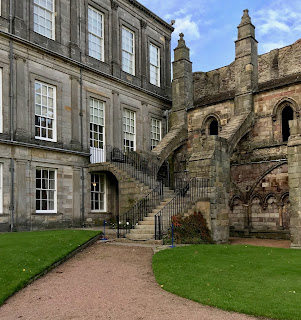 You can imagine we were pretty tired by the end of this day of tours. But it was all quite wonderful and I'd do it again! We again had an early supper at a cafe (soup and sandwich) and came back to our room to relax!
Posted by Anne Lind at 12:21 AM