A Day in Calais

On Tuesday morning we walked to the ferry terminal, only about 5 minutes from our hotel. We were told to be there an hour early to check in and we soon found out why. Once the foot passengers (not many more than a dozen) were checked in, we were taken by bus across the terminal to our ferry. We were impressed by the various lanes of moving cars and trucks, a complicated dance of unloading and loading. We went through immigration control and security on the UK side. The crossing itself was good, the sea wasn't especially rough. It took about an hour and a half.

When we arrived in Calais, we repeated the process, taking a bus to the terminal and then walking into town. It was about 3/4 mile and the same dozen or so people were walking it. When we finally got into the town, the first thing we saw was this 13th century watchtower, the Tour du Guet. It is on a large open plaza in the middle of the town with shops and restaurants on all four sides. We were disappointed to see that many businesses were closed. Calais did not seem like a very prosperous town at this point.

There was a light misting rain, although it wasn't too cold (about 60° F). We stopped at a brasserie and had tea (me) and wine (Dan) and enjoyed sitting there for a while. But eventually we got up and continued walking. We came to the Parc Richelieu, which was very nice. It included this 2017 statue installation of Churchill and DeGaulle celebrating the French-British collaboration during WW II. 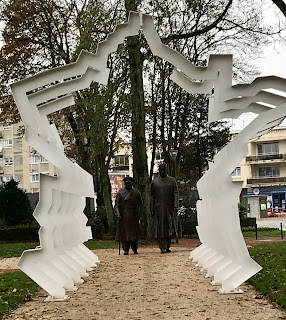 Near the park was the Musee de Beaux Arts and we stopped in. I saw a brochure for a WW II museum and got directions to find it a few blocks away. On the walk over there we got a good view of the town hall. 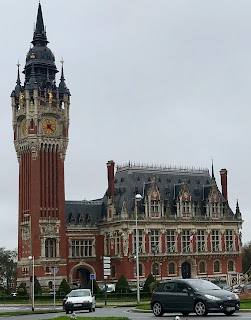 Unfortunately, when we got to the WW II museum, we found out it is closed on Tuesdays. We sat in the park outside it for a bit and watched this group of African boys getting set up with a game of football (soccer). 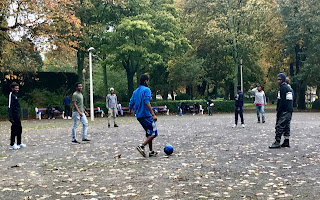 We headed back toward the center of town, stopping at a boulangerie/patisserie to try some French pastries. They were indeed good, but the pictures weren't! When we got back to the plaza and up close to the Tour du Guet, we saw that there is another statue of DeGaulle, this time with his wife, who was from Calais. The statue commemorates their wedding, which took place in the town hall. 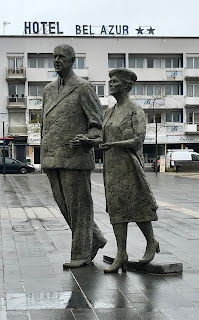 As the weather continued to be very damp, we stopped again at a brasserie for tea and wine and this time a cheese plate, which was served beautifully. 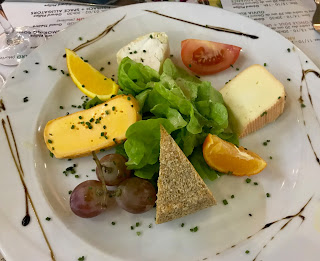 By this time we were quite tired and not enjoying the weather, so we headed back to the ferry terminal. We were able to get on an earlier ferry than we had planned without any problem. Two family groups that were on our first crossing were also returning early. All in all, we are glad we went and we enjoyed the day in spite of the weather. I was pretty tired after walking more than 7 miles according to my iPhone! Tomorrow we leave Dover and head to Portsmouth.