Last year I went a little crazy taking photos at the Chiang Mai Flower Festival. If you are interested, look back into the February 2015 posts. This year was very different. Dan had a Thai lesson on Saturday morning, so I walked to the park (about a mile) and met up with Seth, Jasmine, and Billy. We looked around the park and at some of the flower exhibits. They didn't seem nearly as numerous as last year, and more of them were inside the park. Instead of many exhibits on the road, there were booths, some with flower exhibits, but many with things for sale. 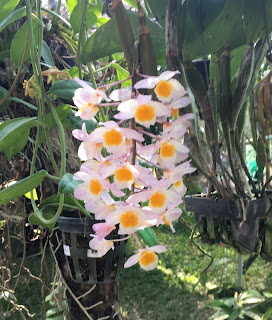 After we had looked around, we saw that the parade was arriving. We walked along the street toward our place. We stopped for a while at the massage school where we get our regular massages; they had a front stairway that made a perfect viewing spot.  We saw a lot of the decorated floats; I'll post some of those later.

We went on back to our apartment, where we met up with Dan, I made scrambled eggs for lunch,  and had a good round of dominoes.

Now it is Chinese New Year and the Chiang Mai Life website says 80,000 Chinese are expected here for the holiday. We will stay away from the most popular areas!! There are already plenty of firecrackers going off even in our neighborhood.