How can I encapsulate the experience of a Woodstock gathering in a few words? Well, I can't, but I'm going to try. Last Thursday we left Vancouver and drove to Seattle. The wait at the border crossing was just over half an hour; I've heard it can be much longer. We settled into our dorm room at Seattle Pacific University and walked to a nearby hamburger joint for a quick supper. On Friday I was in FWS/WOSA-NA Board and Alumni Council meetings all day.

Friday evening the main event got going with a delicious salmon dinner and introductory session, followed by a film about Dan Terry. Jonathan Larson, Dan's good friend and classmate at Woodstock, presented the film and answered questions afterward.


Saturday morning began with the required business session followed by the Woodstock School presentation. This year Eleanor Nicholson, President of the Woodstock School Board and former Principal; Abhra Bhattacharjee, Director of Development; and Pete Wildman, Head of Communications were present. Marcus Shaw, Alumni Relations Coordinator, also attended from the school.

There were wonderful sessions on the theme of "Stewards of Our World" on Saturday and Sunday. Unfortunately, due to other responsibilities, I didn't get to most of them. The silent auction and sales were held just outside the auditorium, so people could browse (and bid!) whenever they went by. 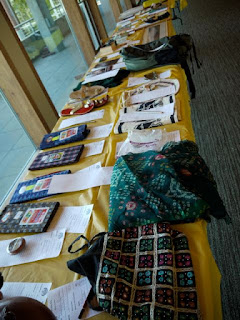 Saturday evening was the high point of the weekend for many people. We traditionally have an Indian dinner, with varying degrees of quality depending on the caterers available at the venue. This time a former student and friend, Darlene Seaman Silliman, worked closely with the SPU catering service to teach them how to do it. The results were excellent.


Sunday morning brought an ecumenical spiritual service. Jackson Day led with an excellent message. Vance George again led the choir, arriving late Saturday night and leaving right after lunch Sunday afternoon. He is busier than ever in retirement, but makes it a point to come to this annual event. In his absence, Dan directed the choir in its Saturday rehearsal.

Sunday evening the parting event was a cruise on Lake Washington. More than 80 participated, enjoying the views of Seattle, houseboats, and beautiful scenery.


On Monday morning we packed up and took the ferry to Bainbridge Island, where Dan's cousin Sally lives. We hadn't seen her for nearly three years and we had a good visit. While we were at her house, we watched multiple Indian canoes pass on their way to a Native American gathering near Olympia. What a treat to watch them pass, escorted by boats, occasionally being towed. We also saw a group swapping out the team of rowers. We heard that some had rowed from Alaska. After a lunch of fish and chips we headed for Spokane.

Now (July 25) we are visiting Dirk and family in Spokane for nearly a week. The Trivial Pursuit tournament is under way, Dirk is performing today (Wednesday) at the local Farmers' Market, so we will go there, and there is talk of some bicycling to Coeur d'Alene on the weekend. Yesterday we drove over to see the house they are buying -- move-in will likely happen the week after we leave.
Posted by Anne Lind at 10:36 PM