Today was our shortest driving day, after pulling a long one on Thursday. We had breakfast near our hotel at a Tim Horton's. If you don't know, this chain is found all over Canada, and now in some of the border states. Higher quality food than the standard American fast food chains.

As we moved west through Alberta, the land began to roll more; we obviously were leaving the plains behind. As we neared Calgary, there was a sign to Banff that left the TC1 Highway we'd been on since before Winnipeg. Our GPS didn't like it and showed that we were in the middle of the field. It wasn't on our Rand McNally 2012 atlas map, either. But we stuck it out and found a great bypass that went all the way around Calgary. It rejoined TC1 on the western side of the city. What a view to see the Rockies coming up ahead of us. 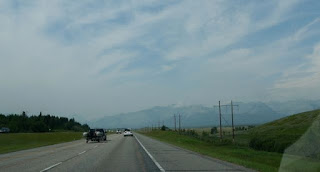 Our hotel is the Rundle Mountain Inn in Canmore, the first town in the valley. Banff is about 17 kilometers north; we'll go there tomorrow. We settled into our hotel after lunch and Dan took off for a bike ride. I went to the indoor pool hoping for a good swim but it must have been filled with glacier melt! I made it across the pool once, then left and took a long walk!