We had one day in Delhi. We went to the zoo in the morning and I'll write more about that later -- I got some good photos. When we got back to Karol Bagh we were pretty tired and hungry, so we stopped at the Suruchi -- our favorite Gujerati thali restaurant.  We generally go there once per visit for dinner, but it was probably better to eat it at lunchtime. 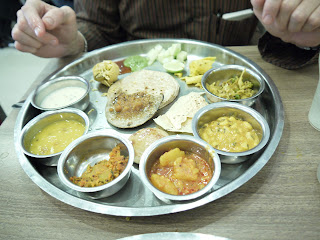 They do have a menu, but the most popular are the thalis -- you can choose Gujerati, Rajasthani, or Punjabi. Punjabi is a lot like the Indian restaurant menus in the US, heavy on the gravies. The Rajasthani is more like the Gujerati, but we definitely like the latter best. First they bring some appetizers, which vary. This time the little ball in the upper left was called a tomato something and there was a bit of tomato in it. It was a little bit like a pakora and extraordinarily delicious! To the right of that are chopped cucumbers and onions and a wedge of lime. Then to the right is something yellow. Another appetizer, difficult to describe. It was rolled, a bit like a thin eggy crepe, but with something else rolled inside. From the left, the small dishes held:  kadhi, a yogurt and chickpea flour-based thin soup; thin dal-based soup; a vegetable called karela or bitter melon, slightly cucumber-like; potato curry; yellow beans of some kind; and cabbage curry. Most of these dishes are slightly sweeter than those in other Indian cuisines. In the center are the breads -- papar, chapatis, and two special ones. The smallest one is thick, filled with something and dipped in ghee. The one on top of the chapatis is a bit thicker, topped with gur (brown sugar) and a dripping of ghee. We were served thin buttermilk to drink with the meal; at first I didn't care too much for it, but I've learned to really like it. All of this food is refilled as long as you can keep eating it. Usually once around is enough for me.
Friday morning we took the train from Delhi to Dehra Dun. It leaves at 6:50 and arrives at 12:40. As soon as it departs we are each given a full liter bottle of drinking water and a newspaper (Hindi or English, as desired). Soon they come around with tea - a packet containing tea bag, sugar packet and dairy creamer packet. There is also a packet of two Marie biscuits, thin plain cookies. The hot water is delivered in an insulated carafe and is very hot. There are also two small candies on the tray but I managed to ignore them. 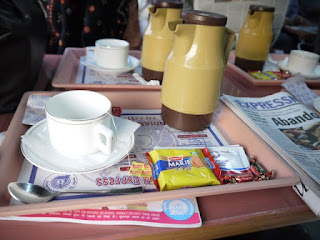 Next come the corn flakes. We are given a bowl with the dry flakes, then a bearer comes around and pours warm milk on them. It sounds much worse than it is; the flavor combination is quite good! 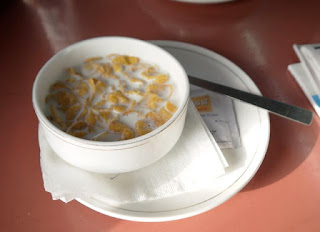 The main course consists of an omelet with a few veggies underneath, two slices of white bread, butter, jam and ketchup. Sometimes we make a sandwich with the bread and omelet and all the condiments. This is the non-veg meal; the veg breakfast has patties based on potato instead of the omelet. I like the patties, but with the bread it makes for a lot of starch! 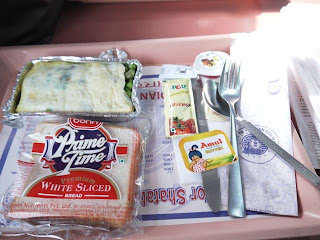 After this we were given a piece of fruit and later on offered some juice. We don't stop for lunch in Dehra Dun any more; we are already well fed.
Posted by Anne Lind at 1:32 PM