On our last day (January 1) in our rental house, we did laundry and packed up our things for the trip. The first place we went was a waterfall north of Hilo. It was beautiful from a distance. The path was fairly long and of varying altitudes, so I passed on it. (I am better, but still quite short of breath.) 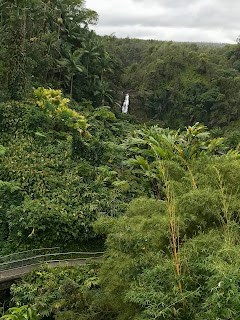 As we left the waterfall park, we saw a local bakery in a small town. It was open (it seemed most places were closed on New Year's Day.) We stopped in and had some early lunch treats. Their baked goods were outstanding. Dan finally had a Hawaiian spam sandwich, sort of like sushi wrapped with rice and seaweed. Spam is very popular in Hawaii; it is on many menus. 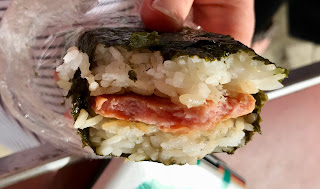 On the way back into Hilo, we took a side road designated "scenic route." It certainly was. It went by the Botanical Gardens, which Anjali, Dirk and Tracy were planning to visit on Tuesday. 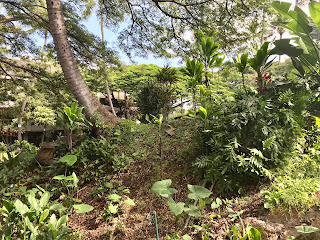 We also drove to some beach parks in town. One had an interesting kind of moat pool around a tree. 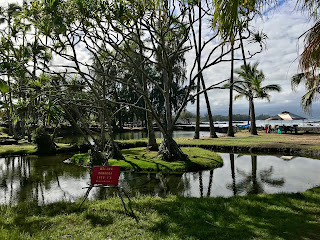 We sat in the shade for a while and watched people swimming and snorkeling. We talked with one woman after she got out and she said the water was quite cold. 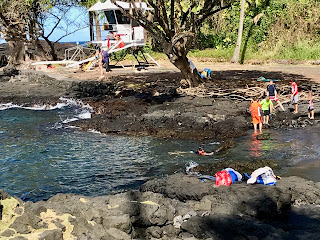 We planned to eat a very early supper at a pancake house, one of the few places open on the holiday. Everyone enjoyed our meal, and a few even had pancakes! When we were finished, we headed for the airport, where Domingos, Dan and I checked in for our flight to Honolulu. Domingos was heading home to work. Dan and I stayed in a hotel near the airport before our late morning flight to Thailand.

We flew Korean Air, as we have the past few years, as it flies from Seoul directly to Chiang Mai. We like not having to change planes in Bangkok. We got in about 11:00 and had a fairly quick run through immigration and customs. We didn't have to wait for a taxi, and we were in our room by midnight. Today (Thursday) we are buy getting set up -- Dan renting a scooter, changing money, both of us doing some grocery shopping. We'll be settled by evening.