On Monday we took a tour bus to Nami Island and Petite France. Nami Island is a beautiful small island in the Han River about an hour and half northeast of Seoul. It is a popular spot to visit, especially in the spring and fall when foliage is at its best. We had a very cold day (high of about 40F), but with lots of sunshine, and it was not crowded at all. We walked all around the island; there were sculptures, shops and cafes. There are even cottages that can be rented for a vacation stay. Nami Island was the location for a popular Korean TV show "Winter Sonata" in 2002. We took a ferry from the mainland to the island, a short 5-minute hop. A zip line was another choice and we wanted to do it, but decided it was just too cold!

Here I am on the walkway near the water. 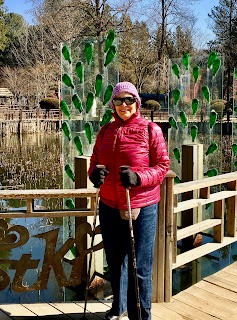 ...and the two of us together. 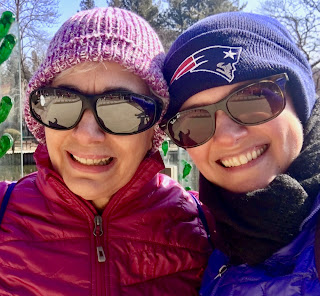 Our first stop was for some tea/coffee and a special syrup-stuffed snowman pancake. 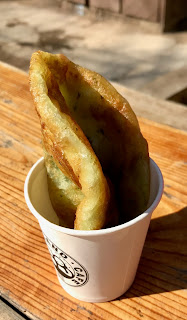 For some reason there is a large fenced area with six ostriches. While we were there, they were pacing back and forth right along the fence. 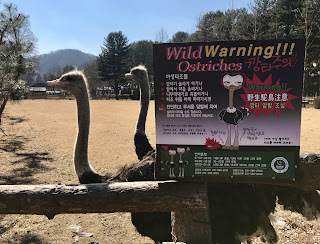 There was a lot of ice, including some fountains near the ferry landing. The first one below was near the landing, the second near the center of the island. 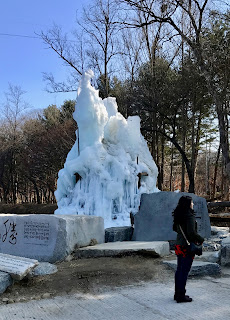 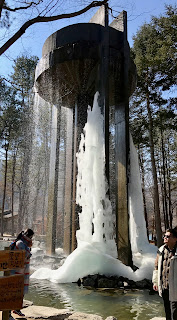 We also saw a peacock strutting around a rest area.

Near the end of the morning, we had lunch at a pan-Asian restaurant, nasi goreng and spring rolls. Very nice, but unremarkable.

After we were all on the bus, we headed to Petite France, billed as an amusement park. This is the sign at the entry. 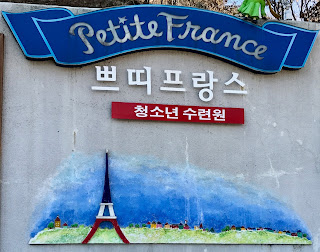 When we got inside, we saw this nice tableau. It turned out that whoever built this place was a big fan of St.-Exupery's The Little Prince. It was very hilly with lots of steps. 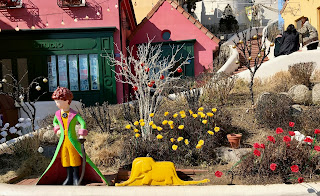 We saw a hall that had reproductions of most of the illustrations from the book, which are quite wonderful. There was also a display of music boxes of various types. This woman was demonstrating them, but as it was all in Korean, we didn't learn much.

As is especially true in many Asian destinations, photo-op locations are numerous. These three young women were posing with the little prince and the birds. 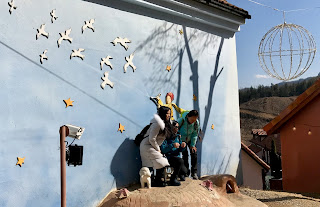 Once we had seen most of it, we decided to have some tea/coffee. Unfortunately, there wasn't a French-style bakery as we had hoped, but we had some cookies that were very good.

It was a long day and I was quite tired by the time we got home around 5:30. I would love to visit Nami Island in the spring once the leaves are out on the trees. Petite France could be missed, but we enjoyed ourselves.