Well, maybe that headline isn't completely true. We had a quiet day on Tuesday. We went into Itaewon by foot for lunch at a ramen place. It was good to have our regular ID cards so we could walk just a few minutes and be out on the street (instead of driving all the way across the base to Gate No. 1 and taking a subway back to the area we want to get to).

The place was very small and when we arrived, there were no seats available. We waited (outside in the cold) and ended up at the counter right in front of the cook. The glass makes it a bit cloudy, but it was fun to watch him cooking and straining the noodles. 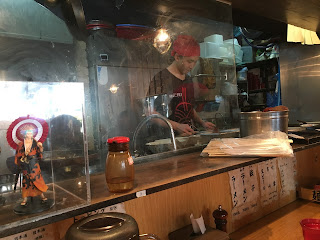 We got the basic pork and noodle ramen (Dan got the slightly more spicy one). It was beautifully presented and tasted delicious. 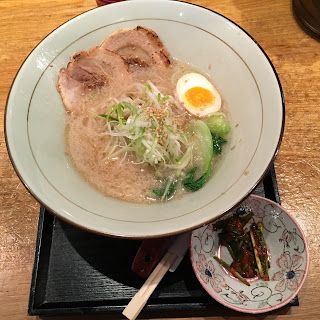 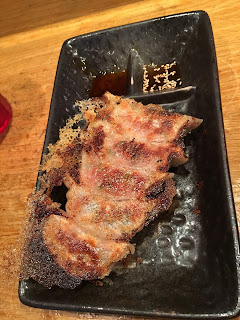 Wednesday morning we took the subway to Seoul Station, the main terminus for the airport train and transfers for several of the subway lines. There is a check-in area for Korean Air where we can get our boarding passes and turn in our bags. Then we'll take the high-speed train directly to the airport. It will be much better than fighting the traffic by car, and probably much quicker. It was good to do some exploring ahead of time and find out where everything is for when we leave Friday.

In the afternoon we headed off for the last of our Christmas gift experiences. We attended a musical show, "The Orchestra Pit." We took a taxi there. The traffic was heavy, as usual. The picture below doesn't look nearly as crowded as the streets actually were! 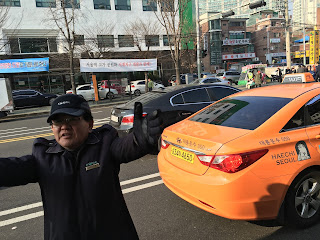 The lobby of the LG Arts Center had a coffee shop and a colorful sitting area. 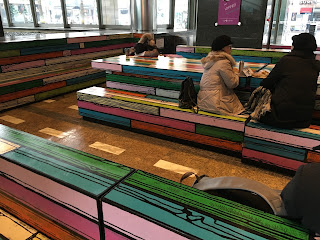 The large poster was a favorite place for the Koreans to pose for a picture. We found out later that the lead character is one of the most well-known actors. 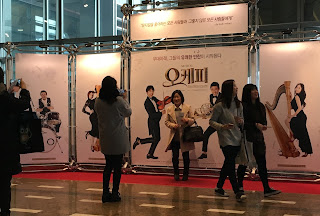 The stage set was very well done. There were 13 actors/singers--one conductor and 12 instrumentalists. It was all in Korean and of course we missed a lot of the jokes. But the overall story of the orchestra members and their interactions were familiar to all of us. The actors were all amazing singers and the music was very approachable. The real orchestra was behind and above the stage. At the beginning and end we could see them. Interestingly, their conductor was a young woman. 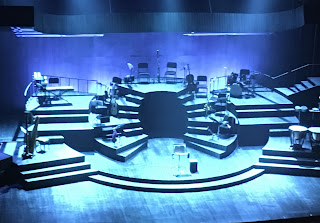 When we came out, it was raining, and we couldn't find a taxi stand. We decided to take the subway, which was a bit of an adventure. Anjali had a great phone app that showed which lines to take and when/where to transfer. We ended up back in Itaewon and had supper at The Food Trucks, a hot dog place with seating for about 12 people. This photo shows my New York dog (with crushed cheese Doritos on top!) and Dan's Cuban panini. The fries were called Quebec fries and had maple syrup on them. They were surprisingly good. 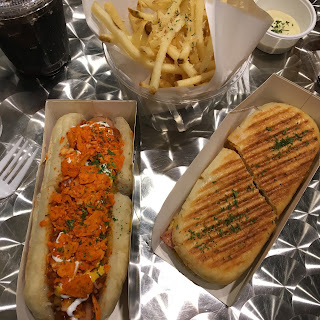